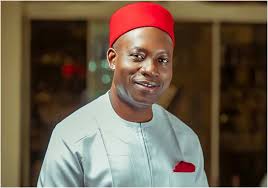 President Muhammadu Buhari, has advised Anambra State Governor Elect, Charles Soludo, to “to rally other stakeholders to tackle the enormous challenges confronting the State and the Southeast in general”

In his congratulatory message to Soludo, who was declared winner of the Anambra State governorship election by the Independent National Eectoral Commission, INEC, Buhari in a statement signed by presidential spokesman, Femi Adesina, said he “looks forward to working with the incoming governor for the peace, security and development of not only Anambra State, but the entire country”

The President also praised the security agencies “for their determination to ensure that the election went on as smoothly as possible, and the Independent National Electoral Commission (INEC) for the successful conclusion of the exercise despite the initial challenges encountered”

innonews - January 17, 2018 0
Fire has rocked part of popular Owerri “Joint”, Ibari Ogwa along Owerri- Port Harcourt Road . Details of what led to the inferno has...