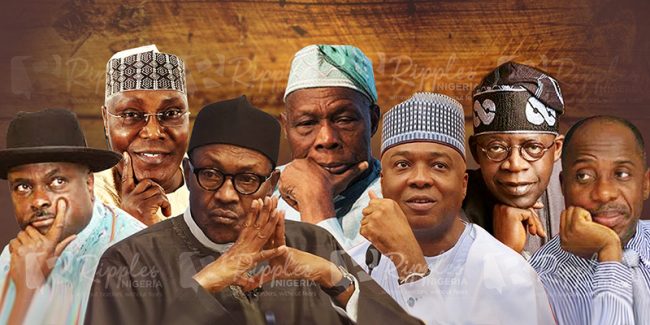 God-fatherism is one of the hindrances to true democracy in Nigeria. It is a system of manipulation in leadership where by an influential party member assists another member to gain a position of power, and in turn the godfather decides how the political office is being handled.

God-fathers are often referred to as political elites or the political class who wield much power through which they participate in, or influence the making of decisions, that allocate resources within and among social units.

They are often seen as political ‘gatekeepers’, they keep the gate to regulate who comes in and goes out of the political arena, they, by their powers, dictate who participates in politics, when and under what situation and circumstances. Ishaku, Jatau and Badung (2014) see god-fatherism as a system in the political cycle that denies citizens of their rights to social services which they termed ‘dividends of democracy’.

In a layman’s language, they are often seen as the ‘jagaban’ of political parties who dictate the socio-political happenings of the state or political party. Political god-fatherism in Nigerian politics is a cankerworm that has rendered Nigerian politics useless and universal franchise inactive.  It has destroyed the Nigerian political space and economy.  It is a manipulative system in our present day government that forces its citizenry to accept pyrite as Gold – which eventually becomes nuisance in office, with no vision or practical solution to ever-proliferating issues and challenges in the economy. The appropriate way to describe these would be in Fela’s words ‘zombie no go go unless you tell am to go, zombie’Electing representatives into government in a democratic dispensation and in a democratic nation is one of the fundamental rights of citizens of that particular country. The citizens are to exercise their universal franchise not by selection, influence or imposition by the so called elites (God fathers) who see themselves as ‘gate keepers’ therefore this write-up focuses on the effects of political God-fatherism in Nigerian politics.

These include;1. An umbrella covering corruption and mismanagement of funds:-  This remain a major cause of Nigeria’s failure to make meaningful progress in improving the lot of ordinary Nigerians.  Public revenues are not only stolen and misused but often used in paying political god-fathers for the services rendered during selection of their god-sons in political positions.

Most corrupt leaders do not face punishment of the law because they believe have Abraham as their father. This is the major reason embezzlement of public funds becomes the talk of the day.

2. They are hindrances to development:  Godfatherism have hindered development in every sector. This is due to the inappropriate sharing of the allocations at the different levels of government among godfathers, at the end of the day, the people have little or nothing of the national cake.

Any attempt by the godsons to go against the will of their father, he/she faces the threat and danger of either being disgraced out of office or being terminated.

3 political offices in Democracy are not hereditary:  Political positions  in a democratic state are not attained by means of hereditary, it is not like a royal or kingship (ie’ monarchy) title in which one or two families has right to the throne or chief title.  Every eligible citizen has legitimate right to contest for any office of his choice in a democratic state, but god-fathers have snatched  this universal fundamental right to vote and to be voted, for their families alone.  I attribute this as one of the major reasons while people shy away from politics; most people see it as a dirty game.  ‘Power hijacked is freedom denied’

4. Protection/misuse of power:  It is believed that God-fathers posses some level of immunity ‘i.e.’ power popularity, which they get by means of their financial status and influence.  They use these tools to control and install people of their choice, so they make sure nobody within their state attends to their level of financial and influential strength and as such no one dares to challenge their authority.

This happens to be one of the major challenges of democracy; leaders are now selected not elected.  The supreme power vested on the people to make choices are being murdered by our so called ‘god-fathers’.  Democracy that was designed to bring about rule of law, freedom, free and fair elections, independence of the judiciary, political equality and respect of fundamental human rights took a different turn with the advent of chronic ‘god-fatherism’ in the political scene, the Nigerian democracy is characterized with rigging elections, political violence, bribery and corruption, looting of funds, disenfranchisement and electoral malpractice etc.   If the ideology of god-fatherism is not curbed, classifying Nigeria as a democratic nation is flattering.

1. The legislature should enact laws that will regulate the influence  of those who could be called Godfathers, especially past leaders in election for different political offices.

2. The electorate should be properly sensitized that nobody has a monopoly of power and power does not belong to just one family.  i.e.’ the electoral bodies should act as watch dog during election. This is where education plays a pivotal role.

3. Restructuring and reformation of political campaigns, government at every level should curtail the influence of money in politics, the best means to do this is by poverty eradication.

4. Political awareness campaigns should be embarked upon by National orientation agents (NOA), civil societies, mass media, etc. On the other hand, the dangerous effects of using Nigerian youths by some unscrupulous politicians to achieve their selfish interest can not be undermined.5. Those willing to take up political positions must know that they are there to serve the community and not for themselves or their family.

In summary, god-fatherism in Nigerian politics is the mother of corruption in Nigerian, a hindrance to our development.  ‘It is the evil that will make Nigeria to continue answering a developing country even in hundred years to come’.…. It is a demerit not merit, a curse and not a blessing to the Nigerian polity.

innonews - September 24, 2019 0
The Imo State Government has taken proactive moves to fight ghost workers in the Local Government system. Below...

innonews - April 1, 2018 0
An NYSC Corp member, Benedicta Etim has redesigned NYSC uniform. She did it to celebrate her birthday in a special way. She really added a...