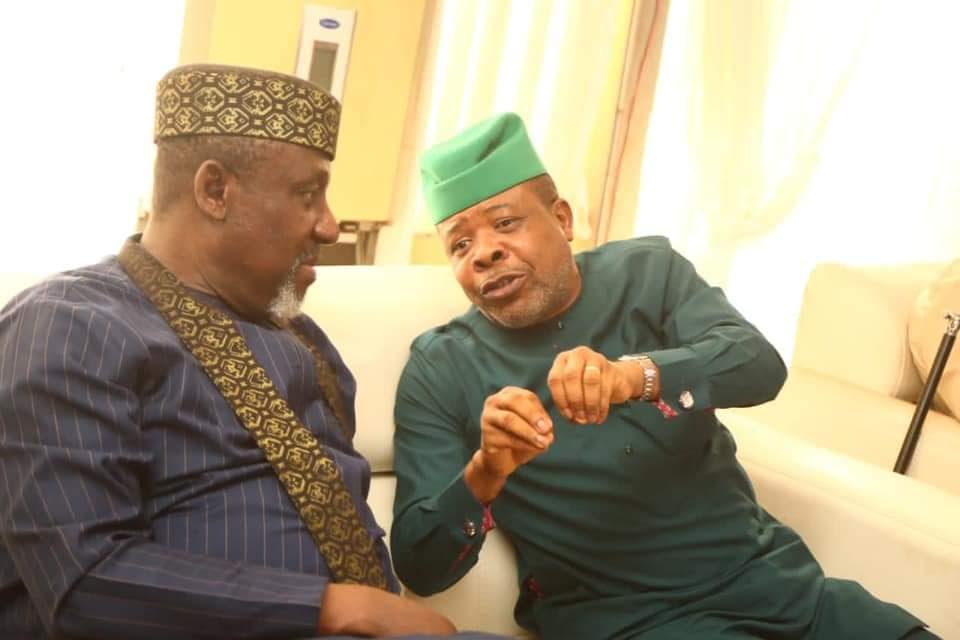 Two former governors of Imo State, Senator Rochas Okorocha and Emeka Ihedioha, put aside their deep political differences at the funeral of the mother of Uche Nwosu, Late Jemmiah, held at Eziama Obaire, in Nkwerre LGA of Imo State.

The event was attended by top political players in the state mainly those in the opposition.

The high point of the event was the meeting between Okorocha and Ihedioha, with the duo seen exchanging banters and later resorted to dancing to the lyrics from a music rendition by a local artiste.

This is the first time Okorocha and Ihedioha are seen in public together, thus fueling speculations that the former political foes may have buried their differences and resolved to close ranks ahead of the 2023/24 Imo governorship election.

There has been speculations in the media of an Okorocha/Ihedioha alliance in the future, which may pave way for an Ihedioha/Uche Nwosu guber ticket in 2023/24 Imo guber.

Nwosu, Okorocha’s son in law, placed second in the 2019 governorship election, coming behind Ihedioha, who was declared winner of the polls by the Independent National Electoral Commission, INEC.

Ihedioha had at the Egbu Declaration, an event where the people of Owerri zone reaffirmed their desire to take over Government House in 2023/24, said he will not campaign for Imo governorship because “campaign has already done itself”.

The former governor is said to have put things in place to take another shot at the governorship in 2023/24, thus the his presence at Nwosu’s mother’s funeral may be part of a larger arrangement to set the ball rolling.

Okorocha said at the funeral that the youths should get their Permanent Voters Card, PVC, to vote out bad government in 2023 in the State.

The unfolding development opens up a fresh dynamics in Imo politics ahead of the 2023/24 governorship election in the State, with analysts predicting a combined political force comprising Ihedioha, Okorocha and Senator Araraume, the trio vehemently opposed to the government of Senator Hope Uzodimma.

innonews - June 19, 2017 0
Heavy downpour has led to flood in some  parts of Owerri, Imo State on Monday. The rainfall which lasted for about two hours caused traffic...

Tosin Kehinde Speaks On Why Dumped England For Nigeria

innonews - December 2, 2018 0
Manchester United youngster, Tosin Kehinde has explained why he chose to play for Nigeria instead of England. The young central midfielder and his representatives had...

innonews - October 23, 2021 0
There are ongoing deliberations between the Imo State Independent Electoral Commission, ISIEC and the Inter Party Advisory Committee,...

Ihedioha:Why I Decided To Run For Imo Guber Again

innonews - June 6, 2018 0
A Peoples Democratic Party, PDP governorship aspirant in Imo State, Rt Hon Emeka Ihedioha has said the need for Imo State to have a...