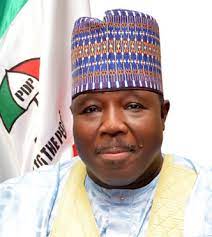 He was among dignitaries at the Admiral Ndubuisi Kanu Square, Owerri, during the Imo Thanksgiving Day Carol of Nine Lessons 2021, organized by the Christian Association of Nigeria, Imo State chapter.

Sherrif is vying for the Chairmanship seat of the governing All Progressive Congress, APC.

Sherrif had told The Nation in October, that he has “going around the country, making consultations and discussing with leaders of the party before I will formally tell the world my intention and aspiration to the office of the national chairman”

The APC is expected to hold its national convention on February 18, 2022, in Abuja.

Though there are indications that the party’s national chairman may come from the North Central, Sherrif, from the North East, is adjudged a major contender for the plum job.

Details of his visit to the State were sketchy, but it may unconnected to his ongoing consultations with key stakeholders of the party, including state governors, who constitute a powerful bloc in the governing party. He is said to be in the state to celebrate with Imo State governor, Senator Hope Uzodimma,  who clocked 63 years last Saturday.

innonews - August 30, 2018 0
*By David Uka, Abakaliki* The Ebonyi State government has ordered the re-opening of the popular Abakaliki Rice Mill, two days after it sealed it off...