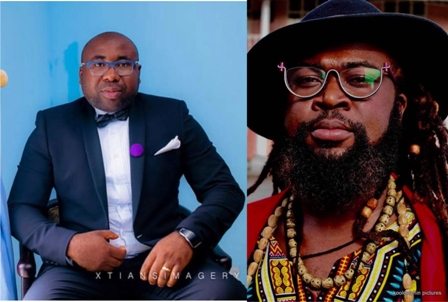 Nwaka greeted the vibrant Novelist, filmmaker, cultural entrepreneur, editor, and a poet over his life of purposeful impacts on humanity.

Addressing newsmen in Owerri, the Imo State capital, Nwaka attributed the birthday celebrant as a worthy Imo son, who has made the State and Nigeria proud through artistic work.

He described Onyeka Nwelue as a rare gem who represents the future of Afro-Asiatic literary literature, and an academia of repute.

Nwaka  admonished Nigerian youth to toe the path of Nwelue, by harnessing and exploiting their God given talent to become assets to their families and the society, rather than embracing social vices.

Nwelue who is an author of many novels and poets, in his  book, “Hip-Hop is Only for Children” earned him an award in 2015 of  a Creative Non-Fiction Book by the  Nigerian Writers’ Awards.

Again, “Island of Happiness” was inspired by true events in Oguta.

Further investigation revealed that Nwelue is the founder of La Cave Musik, a record label based in Paris, France, and co-founded the UK-based publishing house Abibiman Publishing.  Further insight disclosed that the Ezeoke Nsu, Ehime Mbano born celebrity had his first Degree in Sociology and Anthropology from the prestigious University of Nigeria, Nsukka.

Afterwards, he bagged a scholarship to study Directing at the Prague Film School in Czech Republic. He was awarded an Honorary Doctor of Humane Letters, by University Queensland in Haiti in 2019.

Nwelue was a Research Associate at the University of Johannesburg, in South Africa, where he runs a bookshop Hattus Books and co-founded World Arts Agency.

He is currently a visiting assistant professor and Visiting Fellow of African Literature and studies in the English Language Department of the Faculty of Humanities, Manipuri University in Imphal, India.

Currently, the legendary Onyeka Nwelue is a visiting Fellow (Academic Visitor) at the University of Oxford.

Nwelue made his United Kingdom debut on 26th August, 2021 with his crime novel, “The Strangers of Braamfontein”.

Hon Nnamdi Nwaka also remarked that as an academic visitor to Oxford, he has not relented in showcasing his endowed potentials.

However, Nwaka, who is a strong contender in the Reps seat, under the All Progressive Congress, APC prayed and wished him more success in his future endeavors.

innonews - March 18, 2019 0
The All Progressive Grand Alliance, APGA in Imo State may lose the political harvest it garnered in the...

innonews - January 2, 2021 0
The Auxiliary Bishop of Owerri Catholic Archodiocese, Bishop Moses Chikwe has been freed by his abductors. According to Police...