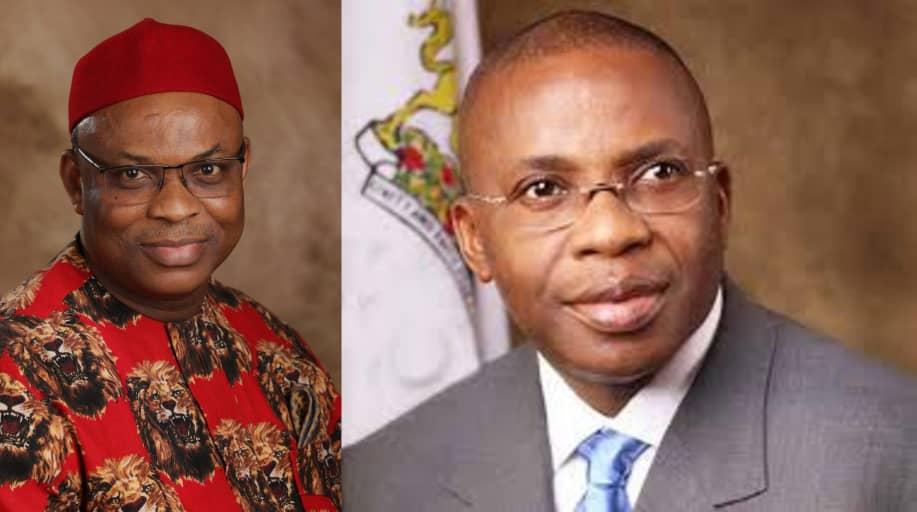 The duo who have been speculated to be eying Okigwe and Owerri senatorial seats in the future, have demonstrated in words and actions, their unflinching support for the present government.

Ohakim had dumped the Peoples Democratic Party, PDP for the APC, last year.

There are speculations that he may be eyeing Okigwe Senate seat, when the first term of the incumbent, Senator Frank Ibezim, elapses in 2024.

The former governor is however yet to announce his next political move in his new political party.

Uzodimma enjoys a harmonious relationship with Ohakim, which dates back many years ago when the duo emerged governorship and deputy governorship candidates of the now defunct Alliance for Democracy, AD in 2007.

“Uzodimma, as a consummate politician will plant his men in key strategic and elective positions, at the State and Federal Levels, in order to strengthen his chances of winning re election as governor  in 2023/24″ said a top level source close to the 3R government.

“The success of Uzodinma’s re election as governor is dependent on the victory of his allies at the State and National Assembly elections, which will hold before the governorship election in Imo State

“The APC which he controls in the state, would give tickets to those who have given undiluted support and loyalty to the governor in all ramifications.

“Through the Direct Primary election which has been backed by APC governors, there is no way the governor would not direct or dictate who gets what in the party during party primary. And loyalty will count as a major factor.

“Since Ohakim joined the APC, he has been working closely with Governor Uzodimma. The former governor is a key ally of the governor. And at all times Ohakim has shown solidarity.

“As a former governor of Imo State, he is a political pillar not just in the State, but in Okigwe zone where he comes from” the source said.

He said “Alex Mbata has not compromised his support for the governor. He has been steadfast and very committed to the government. He is solid and commands enormous political goodwill in Owerri zone.

“He has done so much for the zone and this has earned him some political mileage. He has successfully translated his success in the corporate world to the political arena without engaging in any political altercations with anyone.

“Owerri zone is adjudged a PDP enclave or stronghold, and the APC must field a formidable senatorial candidate to wrestle the zone from the umbrella party” he stated

Mbata had on December 16, 2021 unveiled one billion naira empowerment programme which over 3,000 Indigenes of Owerri zone drawn from 104 wards in the zone benefited from.

Governor Hope Uzodimma who attended the programme, advised public office holders in the State to emulate the business tycoon..

“I want to on behalf of the government and the entire people of Imo State carry bundles of greetings to Prince Alex Mbata, for finding a space in his heart to partner with government in his empowerment programme” Uzodimma said.

“Let me use this opportunity to invite our brothers and sisters who may not be as rich as Alex Mbata, who probably may have more money than Alex Mbata, to toe this line of honour” Uzodimma stated.

Political analysts contend that among several Owerri sons and daughters who have set their sight on Owerri zone Senate, Mbata towers above them in terms of capacity, exposure, and financial backbone to secure victory for the APC in Owerri zone.

Peter Obi: I Don’t Want To Be President Of Excuses-Nigeria In...

innonews - July 6, 2022 0
Nigeria is in coma.  This was disclosed by Mr.Peter Obi, presidential candidate of the Labour party.

INEC To Uzodinma: Show Us Proof That INEC Officials Are Loyal...

innonews - August 23, 2017 0
A Owerri based journalist, Modestus Nwankpa writes on his ordeal with agents of  Owerri Mayorial Affairs Office By Nwamkpa Modestus# The establishment of the Owerri Mayoral...