Home Politics ‘Owerri Zone Under Represented At The Senate’- Nwachukwu 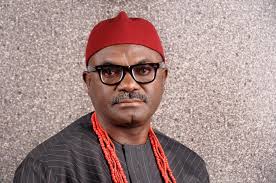 In what appears taking a swipe at past Representatives of Owerri zone at the Senate, a Chieftain of the All Progressive Congress, APC, in Imo State, Mike Nwachukwu, has fumed at the level of poor representation of the zone at the Red Chambers of the Senate.

He told newsmen at his Egbulu Obube country home, in Owerri North LGA that Owerri zone has not been effectively represented at the Senate since 1999. He said he is joining the race to represent the zone in the senate again in 2023, having not succeeded in his first attempt in 2019.

The ex banker said he has taken under study of the zone, revealing that he now has full grasp of the problems of the zone having toured the 104 wards in Owerri zone when he vied for the seat four years ago.

Nwachukwu said there is need for assessment of all the contenders for Owerri Senatorial seat in 2023, in order for the zone to elect the best to the Red chambers.

“The more the merrier. Many aspirants joining the race is a healthy development. But the media should be able to organize a debate for all the contestants, with a view to ensuring that the best represent the zone at the Senate”he said.

Nwachukwu heaped praises on Governor Hope Uzodimma, whom he said has performed creditably despite the enormous challenges he faced when he assumed office

innonews - July 10, 2021 0
Senator Samuel Anyanwu has said some lawmakers, Federal and State, from Imo State, are planning to return to the Peoples Democratic Party,...