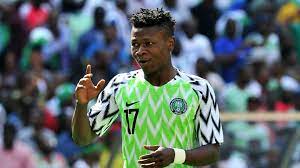 According to The Telegraph, the 24-year-old Bordeaux forward is set to join Claudio Ranieri’s side in a £3.5m deal with an agreement reached between both sides.

Kalu is set to be the fourth Nigerian to be on the Hornets’ payroll this season with William Troost-Ekong, Emmanuel Dennis, and on-loan goalkeeper Maduka Okoye all at the English club.

The 24-year-old will also be Watford’s fourth signing of the January transfer window following deals for defenders Hassane Kamara, Samir, and midfielder Edo Kayembe as the 17th-placed club battles against relegation.

Kalu is set to undergo his medicals on Wednesday with the deal expected to be announced after that. He continues a long line of Nigerians to have played for the club including Odion Ighalo, Isaac Success, and Oghenekaro Etebo.

innonews - July 14, 2017 0
A Journalist and a reporter attached to a local tabloid in Owerri, Nigerian Horn Newspapers, Mr. Destiny Isinwa has been attacked by some hoodlums at...

innonews - April 22, 2020 0
PRESS RELEASE In line with their earlier commitment to keep Imo citizens informed of the latest on coronavirus pandemic,...

innonews - November 4, 2017 0
A former Deputy Speaker of the House of Representatives, Rt Hon. Emeka Ihedioha has commiserated with national leader of the All Progressive Congress, APC,...

Super Eagles Have No World Class Goalkeeper Yet- Rohr

Orluzurumee Speaks On Killings In Orlu, Sue For Peace