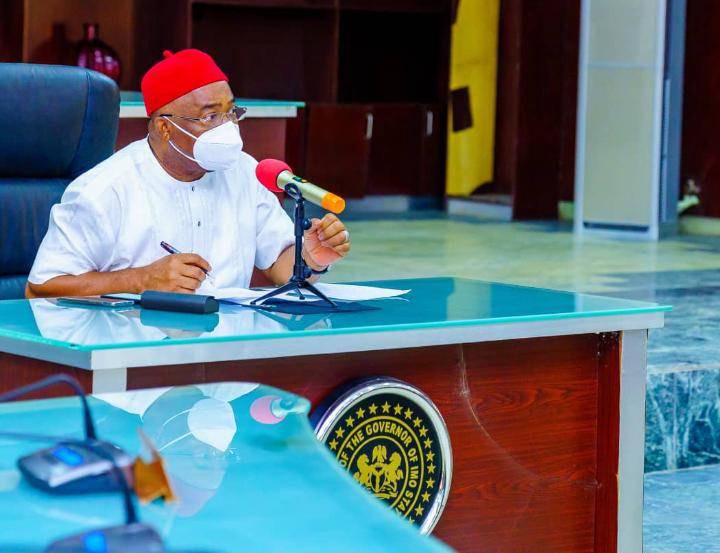 Governor Hope Uzodimma has announced N1m and N5m respectively as reward for any person or group of persons, with useful information that could lead to the arrest of any bandit or identification of the camp of bandits in Imo State.

Speaking to executive members of the All Progressive Congress, APC from the state to the ward levels at the Sam Mbakwe Executive Chambers, Government House, Owerri, Uzodimma called on party leaders to rise against the tide of insecurity.

He said his administration has put in place measures to deal a final blow to it in the State.

He noted that bandits have done their worst, saying they have failed because his government has been able to push the agents of darkness away for light to lead.

He expressed surprise that members of the opposition are blind to his modest achievements in the face of insecurity, banditry, unknown gun-men and social media terrorism, adding that his achievements are “a product of support from both Imo people and the Federal Government which are all APC.”

According to a statement by his Chief Press Secretary/Media Adviser, Oguwuike Nwachuku, the Governor told his party men to work together to grow the party in Imo State.

Imo State has been plagued by insecurity since 2020, with the activities of unknown gunmen,bandits and kidnappers at its peak.

At the 6th Imo Stakeholders summit held on January 4,2022, Uzodimma, who had earlier promised to reveal those behind insecurity in the state, failed to do so, stating that it would jeopardize the work of security agencies in the State.

innonews - May 17, 2018 0
President Muhammadu Buhari, on Thursday, 17th May, 2018 received letters of credence from Ambassadors of Guinea Bissau and Thailand at State House, Abuja. PHOTO CREDIT:...