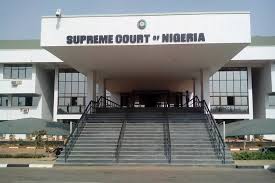 Legal fireworks between Imo and Rivers States government over disputed 17 Oil wells, continued at the Supreme Court on Monday.

After taking arguments from counsel of both parties, Justice Olukayode Ariwoola who led the Supreme Court Panel of Justices, fixed May 6 for judgement.

He said that the court would ensure delivery of the judgement on the appointed date.

Recall that the nation’s apex court had on July 15, 2021, granted an order of injunction stopping the Federal Government and it’s agencies from ceding 17 disputed oil wells located at Akri and Mbede to Imo State.

Imo and Rivers States have been entangled in a legal battle on 17 Oil wells located in Ndoni and Egbema local government areas of the two states.

innonews - May 7, 2019 0
The National University Commission, NUC has granted operational licenses to three newly established universities in Imo State. They are...