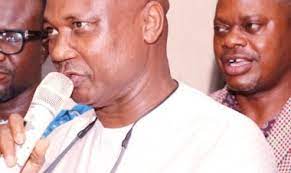 He said the commission was able to execute and commission some of these developmental projects, because the Governor of Imo State, Senator Hope Uzodimma, funds the commission properly because he believes in society development and human capacity advancement.

The ISOPADEC boss who spoke with newsmen in his office in Owerri on Wednesday, noted that some dilapidated hospitals, health centers, roads, water boreholes and school structures are being rehabilitated and equipped with quality facilities, some completed and some are ongoing, stating that the commission has touched all  communities of ISOPADEC with the intention to encourage productivity, development and peace.

Orie who urged the people to always protect these projects so that they benefit more from them, maintained that there are many scattered ongoing projects like the construction of six classrooms block at Ozuh community primary school Omuma, Oru East, construction of six classrooms block at Okwuorji primary school, Awo- Omamma Oru East. He assured that soon the projects will be completed to enhance productivity and development at the areas.

innonews - August 4, 2019 0
Ahead of the 2019/20 season, Argentina striker, Sergio Aguero and Belgian international, Kevin De Bruyne, are the highest paid players at Manchester...

INTERVIEW: 2023: Role I Will Like To Play- Chioma Uzodimma

innonews - January 30, 2022 0
In this interview, the First Lady of Imo State, Chioma Uzodimma, who was actively engaged at the just concluded two-day APC 2022...

innonews - April 2, 2018 0
The remains of popular Owerri based preacher, Bishop Alexander Ezeugo Ekewuba of Overcmers Christian Mission will be interred on April 27, 2018. The Late Bishop...