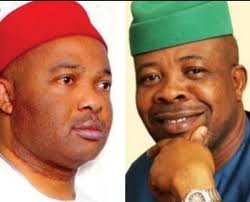 The Ngor Okpala State Constituency Bye election, has been described as a test of popularity between Governor Hope Uzodimma and former Governor of Imo State, Hon.Emeka Ihedioha.

Uzodimma and Ihedioha have remained perennial political foes, after the Supreme Court had removed the latter from office as Governor of Imo State in January 2020.

Aside the popularity test, the Ngor Okpala Bye election, coming more than a year to the governorship election, is also adjudged a litmus test for the All Progressives Congress, APC, and the Peoples Democratic Party, PDP, in the State.

The two political parties are rated the top contenders for Imo governorship seat, with both parties preparing grounds early enough, to brace the rope of victory in 2023.

Ngor Okpala LGA, is one the nine local governments in Owerri zone, with a large voting population.

Ihedioha prior to his emergence as Governor of Imo State,had represented Ngor Okpala alongside Aboh Mbaise, at the House of Representatives for 12 years.

All that is on the verge of contestation, with the APC making ferocious incursion in Owerri zone, which it wants to snatch from the grip of the PDP by winning Ngor Okpala State Constituency.

Ngor Okpala bye election marks the beginning of a resolute desire by the APC to take over Owerri zone in 2023.

INNONEWS observed that the intensity of the Ngor Okpala State Assembly bye election, can be attributed to the overdose of politicking already exhibited by the PDP and APC.

Uzodimma and Ihedioha had led the campaign team of the APC and PDP, last week to Ngor Okpala.

Analysts say the duo have at all times exhibited a ferocious desire for Imo governorship and the Ngor Okpala Bye election, is a mirror to see how resolute they are for the titanic governorship contest in 2023.

innonews - December 10, 2019 0
The newly established Imo State Signage and Advertising Agency, IMSAA, has rolled out its plans to ensure it manages, regulates and...

innonews - April 25, 2018 0
*BY OKECHUKWU NWOSU* Residents of Owerri, Imo State capital at the weekend resorted to removing illegal structures by themselves to avoid demolition by a Government...