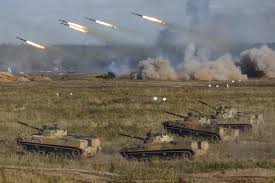 Russian forces have unleashed an attack of Ukraine on the orders of Vladimir Putin, who announced a “special military operation” at dawn, amid warnings from world leaders that it could spark the biggest war in Europe since 1945.

Within minutes of Putin’s short televised address, at about 5am Ukrainian time, explosions were heard near major Ukrainian cities, including the capital, Kyiv.

The scope of the Russian attack appears to be massive. Ukraine’s interior ministry reported that the country was under attack from cruise and ballistic missiles, with Russia appearing to target infrastructure near major cities such as Kyiv, Kharkiv, Mariupol and Dnipro.

Explosions from artillery rockets lit up the night sky as shelling began near Mariupol, video showed. A senior adviser to Ukraine’s interior ministry said that it appeared Russian troops may soon move on Kharkiv, which is about 20 miles from the border. Locals in Kyiv sought safety in bomb shelters as explosions were heard outside the city.

Air raid sirens sounded over the capital and residents of Kharkiv sheltered in the city’s metro, scenes that haven’t been seen in those cities since 1941.

“Putin has just launched a full-scale invasion of Ukraine,” said Ukrainian foreign minister Dmytro Kuleba. “Peaceful Ukrainian cities are under strikes. This is a war of aggression. Ukraine will defend itself and will win. The world can and must stop Putin. The time to act is now.”

In a bid to justify the attack, Putin claimed “A hostile anti-Russia is being created on our historic lands.”