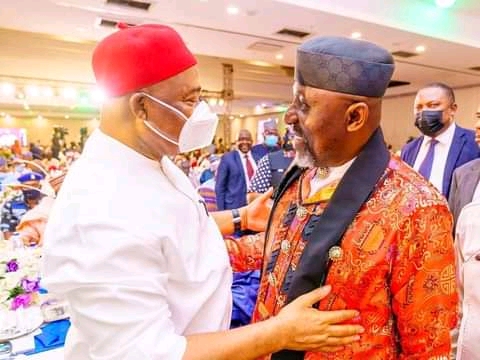 Imo State Governor, Senator Hope Uzodimma and his predecessor, Senator Rochas Okorocha, Thursday, met in Abuja and exchanged greetings to the stunning surprise of many.

The meeting of the two at the Ladi Kwali hall of Sheraton Hotel And Towers in Abuja came as a surprise to many.

The duo who have been entangled in fierce altercations since 2020, discussed and embraced each other to the admiration of guests present at the Yobe State Education Fund Raising event.

The last time both men met was at Uzodimma’s inuguration as Governor of Imo State on January 20, 2020.

Okorocha had severally accused Uzodimma of witch hunting him, by embarking on recovering from Okorocha, State assets and properties in his possession.

The feud reached a crescendo last December when Okorocha’s son in law, Uche Nwosu was arrested in a gestapo style reminiscent like an abduction by security operatives attached to Government House, Owerri.

The feud also centered on the soul of the All Progressives Congress, APC in Imo State.

Uzodimma took control of the party structure in Imo State, shutting out Okorocha and those in his camp.

There are speculations that Okorocha’s loyalists are on the verge of leaving the APC for the opposition Peoples Democratic Party, PDP.

The Abuja meeting has raised eyebrows, as analysts expressed diverse opinions. While some say it is a sign of an end to a lingering face off between both men, others contend that it is a smokescreen, a cover up to outsiders who were present at the event.

innonews - March 2, 2018 0
Youths under the auspices Youths for Accountability, Transparency and Good Governance in Nigeria (YATGGIN) led by its President, Comrade Ibeh Chukwuemeka at the weekend...

innonews - May 3, 2018 0
The National Industrial Court sitting in Owerri and presided by Hon Justice O.O Arowesegbe has reinstated the sacked elected state officers of National Union...

APC Members Are Fed Up With Okorocha- Ajumbe

innonews - March 22, 2018 0
A chieftain of the All Progressive Congress, APC in Imo State, Chief Orikeze Vitalis Ajumbe has said majority of members of the party have...

innonews - December 10, 2019 0
The National Bureau of Statistics, NBS, has rated Imo State, the least corrupt State in Nigeria. This is contained...