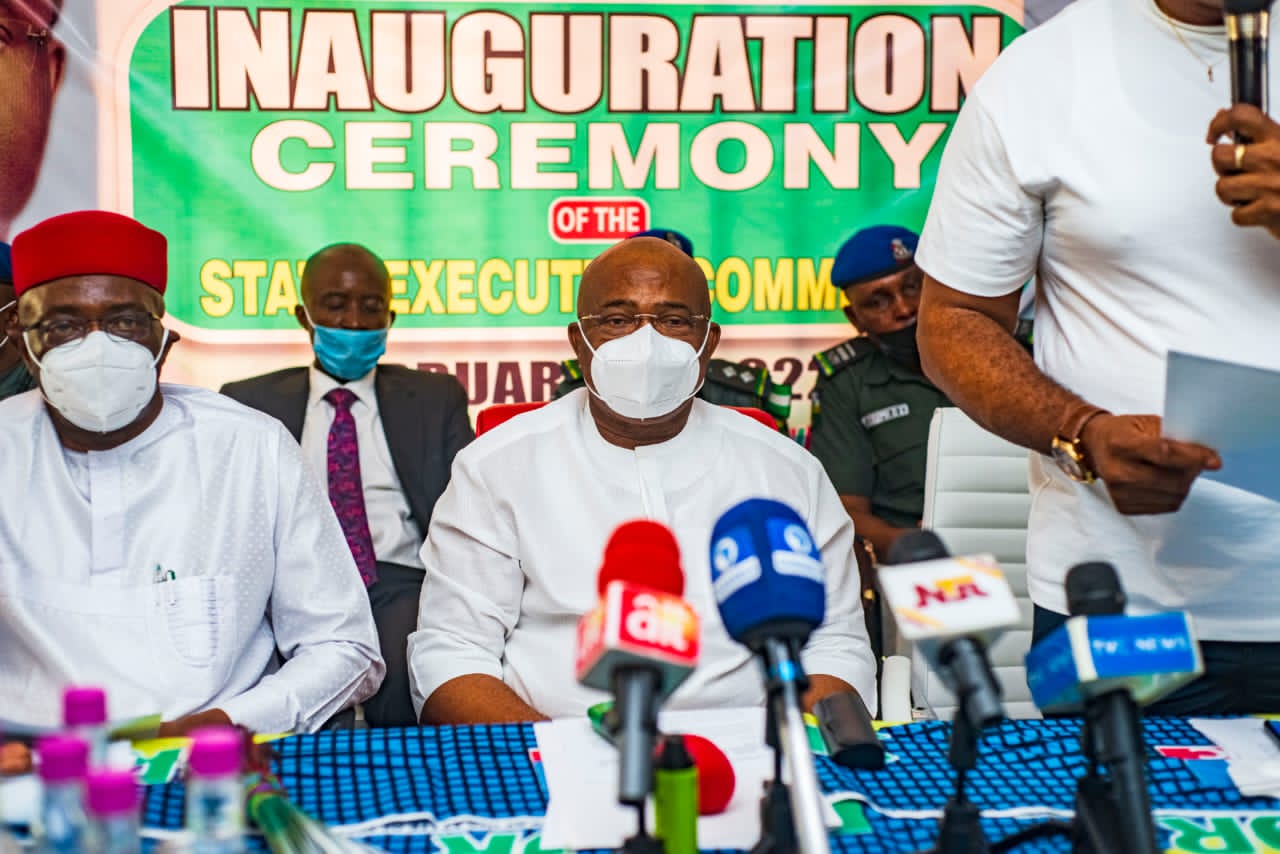 Governor Hope Uzodimma of Imo State on Monday met with leaders of the All Progressives Congress (APC)  in Imo State and challenged them to work hard to ensure that the Party wins the Ngor-Okpala  Constituency Assembly bye-election slated for Saturday, February 26, 2022.

It was also an opportunity for the Governor to enjoin the Party Executive in the State to keep its doors open for all intending members who wish to join the APC.

Addressing the Party leaders at the State headquarters on Okigwe Road Owerri, the Governor reminded them that what the APC needs most today is quality leadership which he said he is also already providing and will continue to provide through his government programmes and policies.

He therefore urged the APC leadership in the State to market the Party in Ngor-Okpala with the activities and achievements already recorded by his administration, insisting that they are ready made yardstick that will make the Party attractive to, not only the electorate in the Ngor- Okpala area, but give other States of the South East cause to join the APC.

Governor Uzodimma who informed the Party leaders that his ambition is to leave APC stronger and bigger than he met it urged them and all members to support him.

The Governor had thanked the State Working Committee of the Party for putting the meeting together, noting that it was important to him for two significant reasons –  first, to reiterate his earlier promise to return APC back to the people and give the Party leadership the autonomy and free hand to manage the party and secondly, to stress the importance of the Ngor-Okpala Constituency Assembly bye-election.

“There is no small election in politics these days hence all members should be concerned and involved for the Party to win the election. It is mperative for the leadership to share responsibilities towards mobilizing and stimulating Ngor Okpala APC members to prepare for the Saturday February 26 election.”

Governor Uzodimma took time to educate the members on the current election process which starts from the Polling Unit to Collation points where election result is declared, noting that it requires full participation of members of which the APC must not toy with.

“All members must be committed from the Voting Point to Collation Centres without relaxing and must avoid after election unnecessary blame games because what the Party needs is nothing but a win from hard work.”

The Governor expressed gratitude to APC members who participated in the Primaries with Blyden Amajuruonu as the APC candidate but lost and have come together to support him and work for the success of the Party.

He thanked them for recognising that  the Party is supreme and promised to soon accommodate them in his administration.

He explained that there are still channels like boards and parastals through which Party faithful can be accommodated in government.

On security in the State, he reiterated his resolve to protect the lives and property of Imo people to the best of his ability as leader of the Party and Governor of the State and prayed God whom he describes as the “Ultimate Security Provider to come to the rescue of Imo State.”

Earlier in his welcome remarks, the APC Chairman, Macdonald Enwere thanked the Governor and other leaders for coming to the secretariat and pointed out that “the Ngor Okpala election will provide opportunity to proof to Imo people that the Party is strong, popular and attractive.”

He added: “It is a litmus test for APC and the Party will leverage on the unprecedented infrastructural development achieved by the Governor under the Shared Prosperity Administration as a Campaign strategy to win the election.”

innonews - April 22, 2020 0
The Imo State Police Command has advised the organizers of this year's Ikeji Festival in Arondizuogu in Imo State, to shelve the...

innonews - November 7, 2019 0
The Federal Government has declared Monday as Public Holiday to mark the 2019 Eid-ul-Mawlud which is in commemoration of the birthday of the...