Home Viewpoint What Does Ihedioha Want In Douglas House? By RICHARD ODU 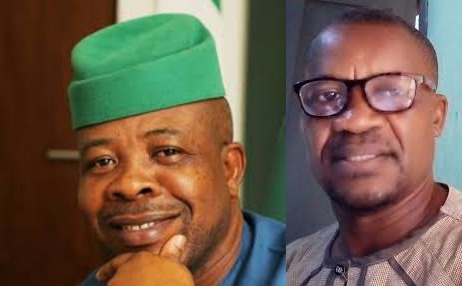 Douglas House is a name given to the Government House, Owerri Imo State, apparently in view of the town’s historical links to Harold Mordy Douglas, the first colonial District Officer of Owerri appointed by the British Consul-General, Sir Ralph Moore, on May 11, 1902.

Douglas, whose term in office ended in 1906, also had a street, the major street in Owerri, the capital city of Imo State, named after him. Indeed, according to history, he had the unenviable reputation of brutality, ruthlessness and repressiveness, which pitched him against the people he governed in those days – the entire Owerri Province.

History also had it that Dr. Stewart, the unfortunate European that was killed during an expedition on a bicycle around Ahiara in the present Ahiazu-Mbaise area, was mistaken to be the unpopular Douglas who allegedly imprisoned blacks on flimsy reasons and used them for slave labour.

Perhaps it was colonial power that gave Douglas the privilege of such an honour of having a street named after him. An attempt to change most of the vestiges of colonialism in Imo was made during the Sam Mbakwe administration when some of the streets bearing foreign names, such as Douglas, Tetlow and Wetheral, were renamed. The successive military government of Muhammadu Buhari arrived in 1994 and Gen. Ike Nwachukwu, who arrived with that administration as governor of Imo, reversed the decisions in apparent spite for their civilian predecessors.

When Rochas Okorocha packed into Douglas House after his victory in the 2007 Imo gubernatorial elections, he attempted to change its name to People’s House. That did not stick either, perhaps, because of the former governor’s seeming low level of popularity at the twilight of his administration.

In any case, history is history. Owerri is stuck with those names for now. Right after the fourth anniversary of the Egbu Declaration at All Saints Anglican Cathedral field Egbu, Owerri North, Imo State, in November last year, former Deputy Speaker of the House of Representatives, as well as former governor of Imo State, Rt. Hon. Emeka Ihedioha, became a target of brickbats from some corners. His sin was that he indicated his fresh interest in the governorship seat in Imo come 2023.

He continued; “I will remain faithfully committed to the ideals of our people. What I know is doing good for the people. I will continue to maintain those democratic principles that stand us out.”

Ihedioha, who was removed as governor of Imo State by the Supreme Court in a controversial judgement on January 14, 2020, after serving about seven months in Douglas House, further said; “When you made me your governor, I did not disappoint you from the beginning to the final stage. These are challenging and tough times. They want to discourage us but it will not happen.”
To achieve this, the former governor said his eyes have been focused on the governorship seat of Imo and nobody would discourage him from his journey to actualize his dream.

These declarations drew flak from his opponents, some of who asked the question, what does Ihedioha want in Douglas House? What did he forget there?” The questions are familiar ones that come from the lips of those who appear to be intimidated by their predecessors angling to return to political positions.

A simple study of the former governor’s statement in pragmatics would reveal a politician that sees his subjects as equals, not those to be talked down on. The usual experience has always been governors issuing threats on the people of Imo at the slightest rift between the government and the governed. In the seven months of his governorship, Ihedioha had a record of not using vile words for anyone, not even his political rivals. Others would throw in sentences against their opponents which tend to disparage them, not Rt. Hon. Ihedioha. When he made statements on contentious issues, it was very well guarded statements.

At the centre of his campaign was the slogan, “my word is my bond”. He seemed not to have faltered on this until the ill-fated January 14. And since he left office in obedience to the Supreme Court, he has thought the rest of his political kinsmen that silence is golden. Not one word had been heard from him, despite several attempts to drag him into the frays occurring often after his administration. Some that needed replies were neatly dealt with, without offence to any of his rivals. In his world, the sound of silence reverberated far more than the growls of his fellow politicians who, though full of themselves, appeared like Lilliputians in the scale of integrity.

His consistency and loyalty in politics had been charming. While others hop from one political party to the other, Ihedioha had remained in the People’s Democratic Party (PDP) since his carrier as a politician. He refused to move even when his close political ally, Aminu Tambuwal, shifted to the All Progressives Congress (APC). The team spirit he exhibited in his short-lived tenure as governor of Imo State was captivating. Under him, the local governments had a breath of fresh air and had the liberty to control their funds with little state interference.

Douglas House appears to be the attraction of some rulers appearing to have repressive tendencies, who were, most times, seen as having been placed in that seat of government by “powerful persons” in controversial circumstances and for specific purposes. This class of rulers have often been tolerated by a peaceful Imo people who find it difficult to ruffle feathers in protests against wrong-doings for the sake of tranquillity. When Ikedi Ohakim was brought into the Douglas House using a little known Progressive People’s Alliance (PPA) over and above Chief Martin Agbaso, the man believed to have won the 2007 governorship election in Imo, who ran under a fully grounded All Progressives Grand Alliance (APGA), eyebrows were raised. And people resisted the thought that the then chairman of the Independent National Electoral Commission (INEC) Prof. Maurice Iwu, Ohakim’s townsman, had played a fast one in favour of his Okigwe Zone.

The Supreme Court decision to remove Ihedioha in the first month of a year bedevilled by the global pandemic called COVID-19 sent shivers up the spines of a good number of people in the state and tended to shake the judicial table in Nigeria. The documents that led the apex court to the decision were later discovered to have contained serious discrepancies where the number of accredited voters was far below the recorded votes cast. Imo did not go to pieces because of that judgement despite the Supreme Court’s refusal to reverse itself after the glaring incongruity had been pointed out to it. The state was more interested in peace. There was no convincing evidence that the All Progressives Congress (APC) won that election. The APC Chairman then, Adams Oshiomhole, admitted that Rochas Okorocha had disappointed the APC. It’s rather an insult on the people of Imo to say that they went after the party that treated them unfairly.

Douglas House yearns for a different kind of leader, one who bonds with the people, one that is out to break the cycle of ruthlessness and impudence allegedly planted by the original occupant of the House, not the one sent to the House to carry out some clannish purposes and agenda, one with a true Sam Mbakwe heart for Imo.

What does Ihedioha want in Douglas House? What did he leave there? Well, I cannot speak for him. But, if I’m left to say, I would guess that he left unfulfilled promises and uncompleted programmes that would have brought pleasure to the entire state. He left broken hearts strewn along the streets, broken hearts that he needs to mend, hearts of numerous senior citizens whose smiles were cut short abruptly by his ouster, hearts of civil servants that were beginning to piece their wrecked self-worth together after experiencing salary cuts and delays in payment, hearts of commuters whose hopes were high, seeing the speed at which bumpy roads were being fixed.

We may not rank say Ihedioha among the saint, but if his political antecedents are to come into consideration, one would wish he should continue to have his eyes on the ball to, apart from others things, also actualize the unwritten Imo Charter of Equity, but he must gird his loins for a greater battle than what he faced in 2019.

No Plans To Dump APC For ADC- Eze Madumere

innonews - August 18, 2018 0
Embattled Deputy Governor of Imo State, Prince Eze Madumere at the weekend denied media reports that he has quit the All Progressive Congress, APC...

innonews - February 25, 2019 0
The Independent National Electoral Commission, INEC in Imo State has released results of the presidential election held in the State.

innonews - May 24, 2018 0
The Award winning movie star, Mercy Johnson Okojie looses Mum today, she shared it in the social media. Here, is her post in her Instagram...