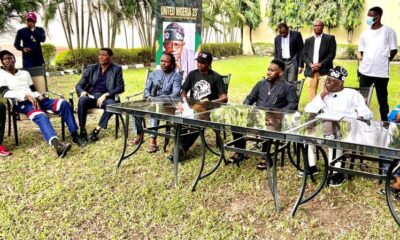 The South East Coalition For Good Governance, SECG, a socio political group, has called on former Super Eagles stars to stop endorsing or flocking around politicians and those seeking public office in the country.

SECG in a statement in Enugu and signed by its spokesman, Emmanuel Obi, said ex Super Eagles players should rather emulate their counterpart football legends on the continent, such as Samuel Eto of Cameroun, George Weah of Liberia and Didier Drogba of Ivory Coast.

Part of the statement read “We are stunned that some of our Super stars have resorted to endorsing politicians for public office.

“Our great footballers should rather emulate Samuel Eto, who rose to become President of Cameroun FA and George Weah, who is the President of Liberia. Also worthy of mention is Didier Drogba of Ivory Coast, who aspired to lead the Ivorian FA

“None of them have gone so low to endorse or flock around politicians as recently exhibited by their colleagues in Nigeria.

“Eto has performed creditably thus far, as Cameroun FA Chief and Liberians are enjoying good governance under the leadership of President George Weah.

SECG said former Super Eagles stars should rather focus their energies in advancing the continued growth of football in Nigeria as part of their quota to national development.

“Our Super Eagles stars enjoy enormous respect and followership among Nigerians. They should not squander it for pittance or for any pecuniary gain. Flocking around politicians is way off the track of what is expected of them.

“They should continue to remain our ambassadors, because some of them are qualified to aspire for public office in the country. They should rather leverage on their goodwill to promote good governance and responsible leadership, which the country is in dire need of.

Recall that some former Super Eagles players such as Nwankwo Kanu, Austin Okocha, Peter Rufai, Taribo West,Victor Ikpeba and others had at the weekend visited APC Presidential aspirant, Asiwaju Bola Tinubu, in Lagos.

They later engaged in a novelty match to celebrate the 70th birthday anniversary of the former Lagos State Governor.

Kanu, while reacting to displeasure expressed by some Nigerians on the visit to Tinubu, said the APC National Leader had donated hugely to his Kanu Heart Foundation 22 years ago when he was governor of Lagos State.

innonews - March 18, 2018 0
For the first time in three years, stakeholders and members of the All Progressive Congress, APC in Imo State went in jubilant mood after...