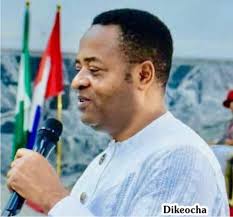 Speaker Emeritus of Imo State House of Assembly, Rt Hon.Godfrey Dikeocha, has listed criteria and qualities of the next Senator that would represent Owerri zone in the Senate.

Dikeocha, in a statement made available to newsmen in Owerri, stated that “Owerri zone needs effective and efficient representation

“In view of the urgent need to rescue the down trodden masses of Owerri zone,the next Senator of Owerri zone come 2023 must meet the following criteria for a people oriented representation in the Red chambers:

1)Must be God fearing & dependable.

2)Must be an honest person

3)Must have a verifiable means of livelihood.

4)Must not be bankrupt.

5)Mustn’t have criminal record of having gone to jail any where in the world.

6)Must show projects he has personally executed in his community or Owerri, meant to alleviate the suffering of our people of Owerri zone.

“For the sake of emphasis,those jostling to represent Owerri Zone must come out clean” he stated.

“We need to know the business they do or their professional background and what they do for a living to forestall the emergence of criminal elements or people with reprehensible character representing Owerri zone in the senate.

“We don’t need those that want to make a living out of representing us @ the Senate or those that will go there to start amassing wealth out of the representation to start buying posh vehicles they never had & couldn’t have had without resort to public funds because of being our representative in the senate!

“We don’t want those that will start expanding their homes in their village,Owerri,Lagos and Abuja because of being in the Senate while ignoring the beleaguered people of Owerri zone praying for God fearing servant leadership !

“The contestants must disclose the status of their finances,how much they are indebted to banks & financial institutions and if they are bankrupt or not!

“Those seeking to be Owerri zone Senator must tell us which successful business they are running before seeking to run the business of representing Owerri zone before they run Owerri zone aground the way they grounded their businesses,if any!

“And if you have never assisted in ameliorating the deplorable condition of the rural masses with your private funds,there will be no need pretending & lying that you will turn every where in Owerri zone to gold when you get to the senate! What public infrastructure like roads,electricity,water projects,Schools projects or poverty alleviation projects have you undertaken in your immediate community before asking the people of Owerri zone to entrust their future into your hands to represent them in the hallowed red chambers!

“We also need to know the criminal record of those seeking to represent us in the senate,have you been in jail any where in the world as we are aware that some of the demagogues mouthing how they will eradicate insecurity in Imo/Owerri zone are ex convicts overseas & we have the records! Former President OBJ did hint about this on Nigerian Presidential aspirants recently!

“If one could make big things out of little he has,we can entrust such person with the big future of Owerri zone in the Senate!

“Owerri zone doesn’t need perennial political office seekers who keep on jostling from contesting one position to another & being serially rejected by the people @ the polls.

“Every generation must have her agenda and every such agenda must have it’s vision!

“Owerri zone needs a new agenda with a new vision not beclouded by myopia!

innonews - December 24, 2019 0
The Imo State Chairman of the Nigeria Union of Journalists( NUJ), Imo Council, Chief Chris Akaraonye has felicitated with all journalists in...

Two Injured, As Lorry Plunge Into Ditch In Owerri

innonews - March 20, 2018 0
It was lamentation all the way on Monday, 19th March, 2018 when a fully loaded tipper carrying sand plunged into a ditch along Owerri-Okigwe...

innonews - December 4, 2017 0
BY DON UBA# Youths under the aegis of Umubochi Awo- Omamma Youths Assembly, UAYA  penultimate week, took to the streets to show their displeasure over...