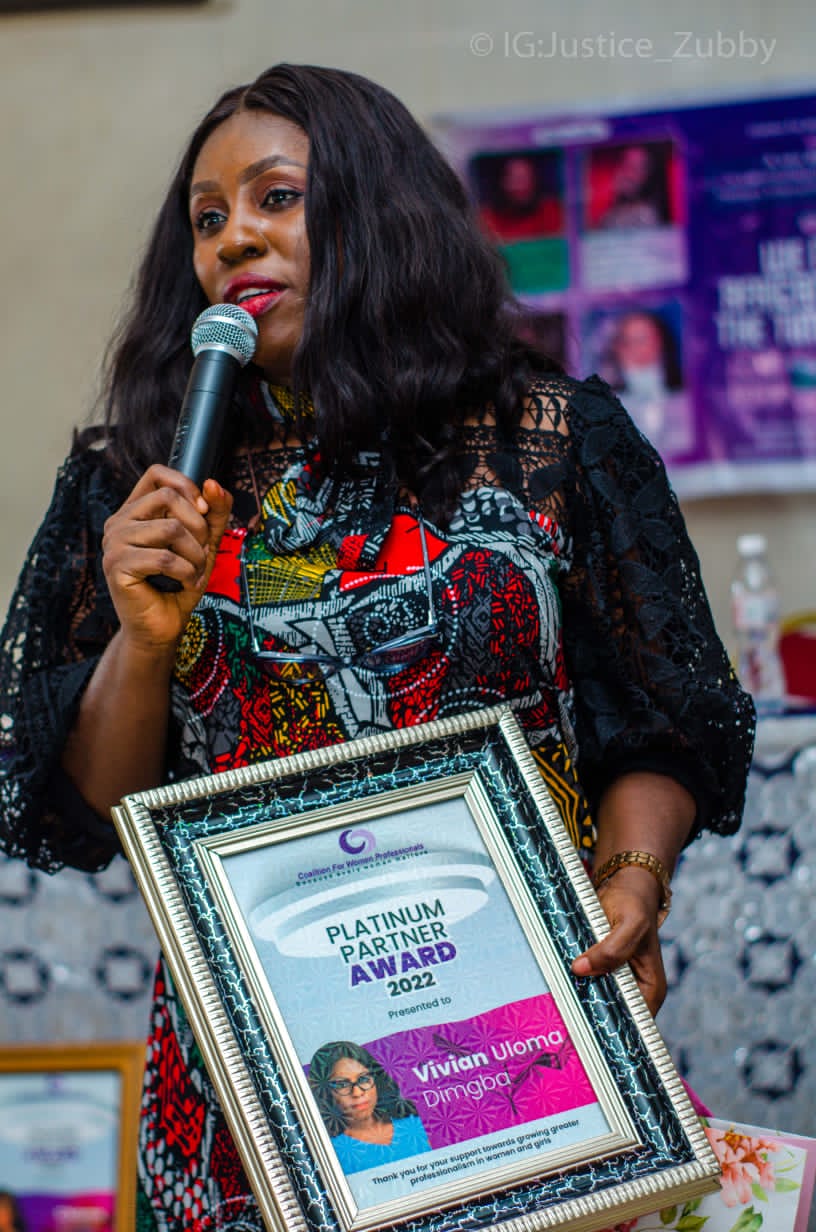 A frontline aspirant for Ezinihitte Mbaise Constituency on the platform of the Peoples Democratic Party, Mrs. Vivian Dimgba has received the Platinum Partner Award from the Coalition For Women Professionals, for her leadership style and numerous support and contribution to the growth of the society.

The award ceremony was graced with women from all walks of life. Various civil organisations were represented.

Ms Ndidi Anike, chairman of Fida Imo state chapter and also Mrs Ogechi ikeh, an SDG activator and human rights advocate were all present to lend their voice to the conference.

Presenting the award to the vibrant Dimgba, one of the most visible assembly aspirants, the Convener Coalition For Women Professionals, Dr Chioma Chigozie Okwum, a cybersecurity specialist Lecturer and Director of ICT at the Spiritan University Nneochi, described her as an intellectual giant who has proven to be a revolutionary advocate for a modern society, inspiring people with her thought-provoking ideas and arguments.

The Convener pointed out that Vivian Dimgba’s contribution in all spheres of human endeavour would be well judged by the verdict of history. She along with the partners of the coalition passed a vote of confidence on Vivian, stating that Ezinihitte struck a goldmine with her.

Receiving the platinum Ambassador award at a colourful ceremony in Owerri, Dimgba thanked the Coalition For Women Professionals, for finding her worthy of the award, saying it would motivate her to do more for humanity.

Dimgba who was also a keynote speaker at the conference made a clarion call to women to aspire for more economic, social and political relevance, by removing every stereotype or bias that is insignificant to their survival.

She reiterated her commitments to stand by the people of Ezinihitte Mbaise, and women all over; mentoring and expanding leadership programmes to build their confidence and empower them towards achieving greatness.

The youthful Dimgba said the yearnings and aspirations of the Ezinihitte Mbaise constituency will continue to be uppermost in her mind.

The former banker thanked the association for honouring her, remarking that the award came at a time when she was not expecting it as she was yet to be satisfied with the contribution she has made so far.

innonews - April 8, 2019 0
The Federal Airports Authority of Nigeria, FAAN, has reacted to the inferno that gutted some parts of the terminal building of the Sam Mbakwe...

innonews - July 29, 2021 0
BY RALPH EJIMKONYE With media reports of a fact finding Commitee said to have been set up by the...

innonews - December 29, 2021 0
A tense political climate looms in Imo State in 2022, as political actors and players prepare for the 2023/24 governorship election