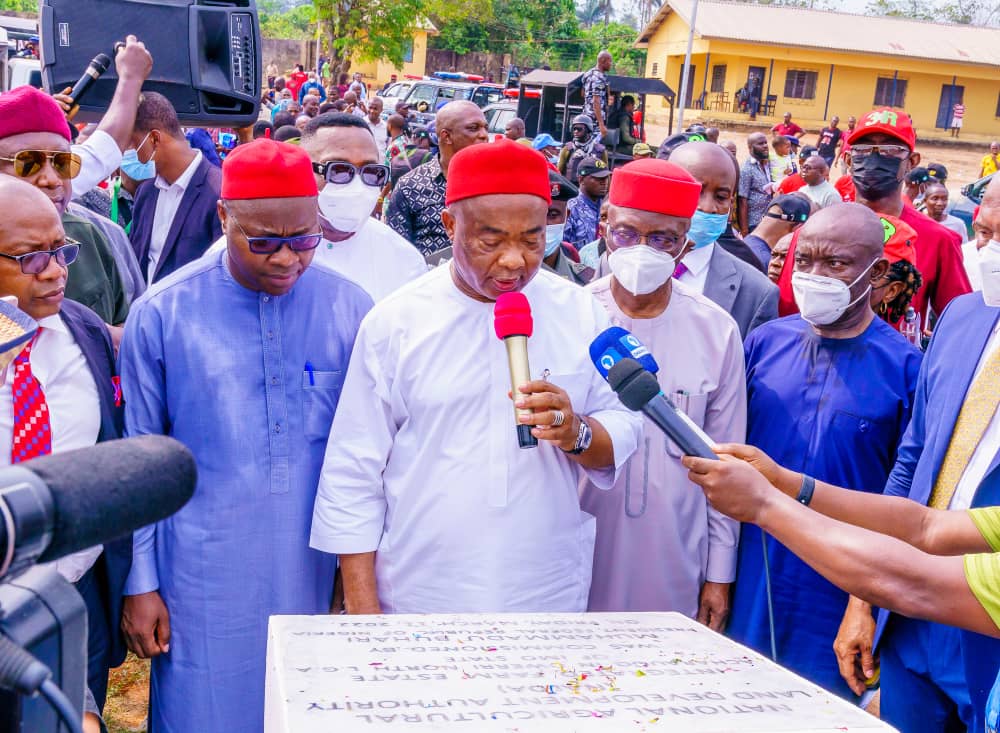 ….partners with NALDA as FG approves N18b investment in the reactivation of Songhai Farm in Imo State.

The Shared Prosperity administration of His Excellency the Distinguished Senator Hope Uzodimma has yet again, proven his dedication and commitment in his industrialization policy in Imo State through economic diversification into Agriculture as he commissions the Acharaubo Farm Estate today, at Emekuku in Owerri North Local Government Area of Imo State.

The Project which is in partnership with the National Agricultural Land Development Authority (NALDA), a Federal Government agency, is and investment of the State that had been abandoned for over 30 years now.

With over 35 hectares of land, the Acharaubo Farm Estate currently has six poultry houses with 18 pens that contain about 10,000 birds, three goat houses with 196 goats, three pig houses containing 108 pigs, three solar-powered boreholes, access roads and drainage, as well as solar-powered street lights. Just like other NALDA farm estates, the target of the Acharaubo Farm Estate is to create job opportunities for the youths and women of the community.

This and other endeavors of the Imo State Government in economic diversification into Agriculture, would no doubt complement existing State policy on Agriculture and boost economic activities in the State.

Speaking during the inauguration, the Chief Executive of NALDA, Prince Paul Ikonne, commended the Imo State Governor, Senator Hope Uzodimma for partnering with the agency in this unprecedented achievement which would in turn create employment for the host communities and the State at large.

On the same note, it was made clear that the President has approved an investment of N18 billion in the reactivation of Songhai Farm Project in Imo State. The industrialization drive of the Shared Prosperity administration is gradually gaining momentum with these monumental records in Agricultural investments.

His Excellency, the Distinguished Senator Hope Uzodimma expressed appreciation, on behalf of the State, to His Excellency President Muhammadu Buhari for aiding the harnessing of great Agricultural potentials in the State towards economic growth. The Governor reassured the people of Imo State, his administration’s continued strive for a better Imo State.

innonews - August 22, 2021 0
As Ghana Offers Them Citizenship. History was made recently as Igbo community in Ghana, the Ghanian government in conjunction...

innonews - May 4, 2022 0
NNEOMA AHUKANNA Imo Women from Okigwe North Federal Constituency under the aegis of coalition of women groups have rallied...

innonews - July 21, 2021 0
The Caretaker Commitee of the All Progressive Congress, APC, in Imo State, says certain persons want to take advantage of the extension...

innonews - May 2, 2022 0
*Calls On PDP Delegates To Vote Him, Describes Him As Epitome Of Integrity, Competence. By Ikem Obioma