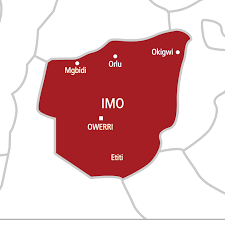 Owerri Zone Patriots, a socio political group in Owerri zone, has aligned with Speaker Emeritus of Imo State House of Assembly, Rt Hon Godfrey Dikeocha, over his recent comments that Owerri zone Senate is not for ex convicts or 419ners.

In a statement in Owerri by National President and Secretary of OZP, Hon.John Igwe and James Ekechukwu respectively, it said those attacking Rt Hon Dikeocha for his comments on the social media are already portraying themselves as agents of 419ners and ex convicts, who should not near the Senate for Owerri Zone in 2023.

“We have observed that Dikeocha has come under intense attack in the social media, particularly from one Emmanuel Opara, who spewed gibberish on Dikeocha and in the process, mentioned that “Chief Jerry Chukwueke has no comparison”

“It baffled us why Mr.Opara would drop Mr.Chukwueke’s name in his diatribes against the former Speaker, when Hon. Dikeocha in his suggestions, never mentioned the name of anyone.

“Is Mr.Emmanuel Opara indirectly saying Chief Jerry Chukwueke is an ex convict? We ask and wonder?

And this is why we are stunned how some people suddenly became scared over his humble advise and lost their sense of judgement.

“It is strange that agents of some Senatorial aspirants in Owerri zone, are losing sleep and panicking overwhat the Speaker Emeritus had said”

The OZP President, vowed that it will enforce the recommendations and suggestions of the Former Speaker by putting in place mechanisms and processes of assessing all the aspirants seeking to aspire for Owerri zone Senatorial seat.

“He listed the qualities of the next Owerri zone Senator, which include someone who is God fearing, an honest person, must have a verifiable means of livelihood, must not be bankrupt, must not have criminal record of having gone to Jail anywhere in the world, etc.

“We also subscribe to what he said, that those jostling to represent Owerri zone must come out clean. And we will ensure we implement all he said to the latter” OZP warned.

innonews - February 26, 2021 0
The Special Adviser to the Imo Governor on Local Government and Chieftaincy Affairs, Chief (Mrs) Rubby Emele has called on the Nigeria...

Okorocha’s In Law, Ololo Speaks: “My Guber Ambition Not Family...

innonews - October 3, 2018 0
A frontline governorship aspirant of the All Progressive Congress, APC in Imo State, High Chief Engr. Chuks Ololo has made it clear that his...