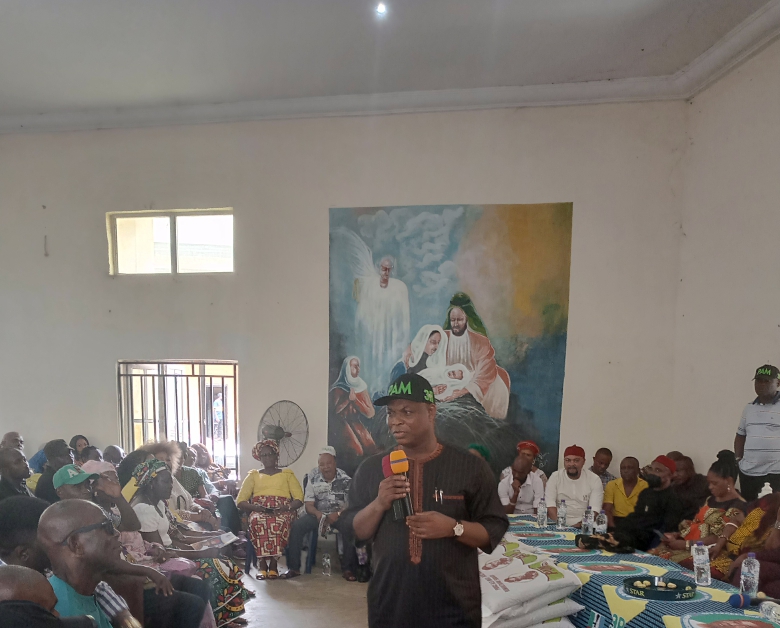 A leading contender for Owerri Zone Senate seat on the platform of the All Progressives Congress, APC,  Prince Alex Mbata has vowed not to disappoint the people of Owerri zone if elected to the Red Chambers.

Speaking to leaders and chieftains of the APC in Owerri Municipal at the residence of the State Chairman of the party and also Apex Leader, Owerri Municipal APC, Mac Donald Ebere, the business mogul urged party members in the municipality to vote for him at the primaries to emerge the party’s candidate.

He said if he gets the party’s nomination as its candidate for Owerri Zone and eventually win the elections, he will endeavour to end poor representation and under-development of the zone.

Mbata, who is the founder of PAM Foundation, said he has empowered several men, women, youths of  Owerri zone through his numerous  philanthropic activities and also employed hundreds of Owerri zone youths through a Factory he built in the zone,  15 years ago.

“I will perform creditably if you elect me to the Senate. I will wipe away the tears of poor representation of the zone. The Senate is an issues based place, which needs a sound mind like me. I m very qualified to be at the Senate because my antecedents do speak for me.

“I humbly present myself to the good people of Owerri Municipal, the leaders and executive members of the APC. Owerri zone needs and deserves the best. I have come to set a new record” the business mogul said

In his remarks, the Imo State Chairman of the APC, Mac Donald Ebere, who is also the apex leader of Owerri Municipal APC, wished Mbata well in his quest to be Senator for Owerri Zone.

He said he desires an undivided APC with no rancor and division.

Other leaders of the party in Owerri Municipal, Barr Willie Amadi, Ambassador Jude Agbugba, Hon Dan Okoro who spoke separately, commended Prince Mbata’s aspiration and urged him not to relent.

Extolling the qualities and virtues of Mbata, the Chairman, Prince Alex Mbata Campaign Council, Chief Henry Njoku (Harritex) recalled the numerous philanthropic activities of the business mogul, including construction of some roads in Owerri Municipal and Owerri North and assisting the State government in tackling Covid 19.

He assured that Mbata would live up to expectations if he elected to the Red Chambers.

innonews - May 17, 2018 0
A Human Rights group, Amnesty International For The Oppressed has indicated interest to intervene in a case of land grabbing involving the Imo State...