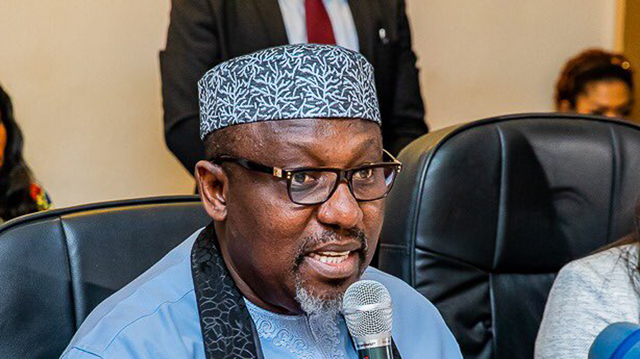 Some political allies and followers of former Governor of Imo State, Senator Rochas Okorocha, have purchased the Nomination And Expression of Interest Forms of the Peoples Democratic Party, PDP.

INNONEWS was told that those who picked the forms from the ex governor’s camp are seeking a return to the federal legislature.

Okorocha has been involved in fierce altercations with Governor Hope Uzodimma, over the soul of the All Progressives Congress, APC in the State.

He has lost the party structure in the State to the Governor, as the national leadership of the APC recognizes the Mac Donald Ebere led Imo State Exco, backed by Uzodimma.

However, despite the glimmer of hope for the Okorocha group, as it awaits the verdict of the Supreme Court, which will decide the authentic leadership of the party in Imo State, some of the ex governor’s men, uncertain where the Supreme Court judgement would swing to, have secured PDP Nomination And Expression Of Interest Forms, as a plan B.

Mr. Dan Nwafor, Okorocha’s ally, is insisting he remains the State Chairman of the APC in Imo State, on the basis of a Court Order which legalized his Chairmanship of the party.

The Supreme Court is expected to give it’s verdict on Nwafor’s matter next month.

A source told this newspaper that the uncertainty of the Supreme Court judgement may have forced some of the former governor’ s allies to opt for PDP Nomination and Expression of Interest Forms.

“It’s Plan B. A safe route. The judgement of the Supreme Court is unpredictable. It can go either way and if goes our way, fine. If it does not, we activate plan B, which will gives us the opportunity to contest in 2023.

“There is also the possibility of the automatic tickets for all APC members in the National Assembly. These are all options before us” said one of the lawmakers in Okorocha’s camp, who craved anonymity.

Before now, there are reports that Okorocha’s loyalists were reaching out to the PDP leadership for possible defection.

The speculation attracted media attention when Senator Okorocha and former Governor Emeka Ihedioha, wined and danced on December 21, last year at the funeral of the mother of Uche Nwosu, Late Jemimah, at Eziama Obiaire in Nkwerrre LGA.

Okorocha and Ihedioha, adjudged to be fierce political foes, have reportedly resolved their differences or rather united for a common political foe- Governor Hope Uzodimma.

innonews - May 29, 2019 0
BY GRACE UCHE 419 ners and sycophants should stay away from Imo State Governor elect, Hon Emeka Ihedioha. This...

innonews - May 10, 2021 0
The Imo State Chairman of Nigeria Union of Journalists Chief Chris Akaraonye within the week had an interface with the executive members...