Home Man In The News ABM: The Die Is Cast (1). By NZE JAMES CHINOYEREM 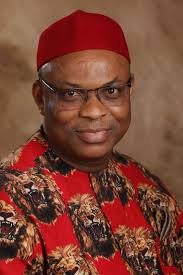 Make no mistake about it, he is not given to frivolities or absurdities, he does not grandstand or dislocate the truth to make you like him, he understands what it means to be real and true, his name is Prince Dr Alex Mbata, ABM.

When over five years ago, he went about constructing his community road, a 4.8km stone based road he did not do it for politics. When he empowered one hundred and twenty women from his community Ngwoma Obube in Owerri North with hundred thousand naira each to start up small scale businesses , he did it to uplift humanity. When he single handedly built the six bedroom apartment for the Catholic Church Community in his community, he did it so that his community would have a Parish status and to glorify God. When he gave scholarships to hundreds of indigent students and renovated schools across communities, he did it so that children from poor homes would have access to good education. Like the Seer,, he saw tomorrow. He knew the best investment was in human developments. He makes no pretence about his passion to assist in lifting up humanity.

Again, when he empowered five thousand people which cut across Port Harcourt, Abuja and Lagos, it was not because he was from there but because there were needs to do that and he did it because he could do it. When he constructed the 2km dual carriage road with drinages in New Owerri leading to Nekede, it was because he saw the needs and agonies of the commuters. When again, he called out over three thousand Owerri Zone people and empowered them in different categories, it was because he knew it was worthwhile. ABM remains a gentleman with a humanistic engagements and touches. He makes no boast about it because he knows the scriptural rewards.

Last Wednesday 13th April, 2022, he gathered and paid all the remaining six hundred Beneficiaries of the N50,000 empowerment in his country home Ngwoma Obube who could not be paid because of the discrepancies in the bank account details they presented. Recall, some doomsayers had parroted that the scheme was a scam. The cash payments blew up the lies and weakened the wicked propaganda of these people who swore never to see anything good done by others because of politics.

ABM : The Die Is Cast (2) will x-ray his blueprints and declaration for the Senate for Owerri Zone.

Maradona Reveals How He Helped Messi

Araraume: I Remain In APC, Would Not Join Any Party Through...

innonews - September 26, 2022 0
Ifeanyi Ararume, a two time senator and former governorship aspirant in Imo State, has debunked media reports that he has quit the...

innonews - May 16, 2022 0
INNONEWS* Delegates to the forthcoming APC Senatorial Primaries in Owerri zone, should consider some factors before electing their flag-bearer.