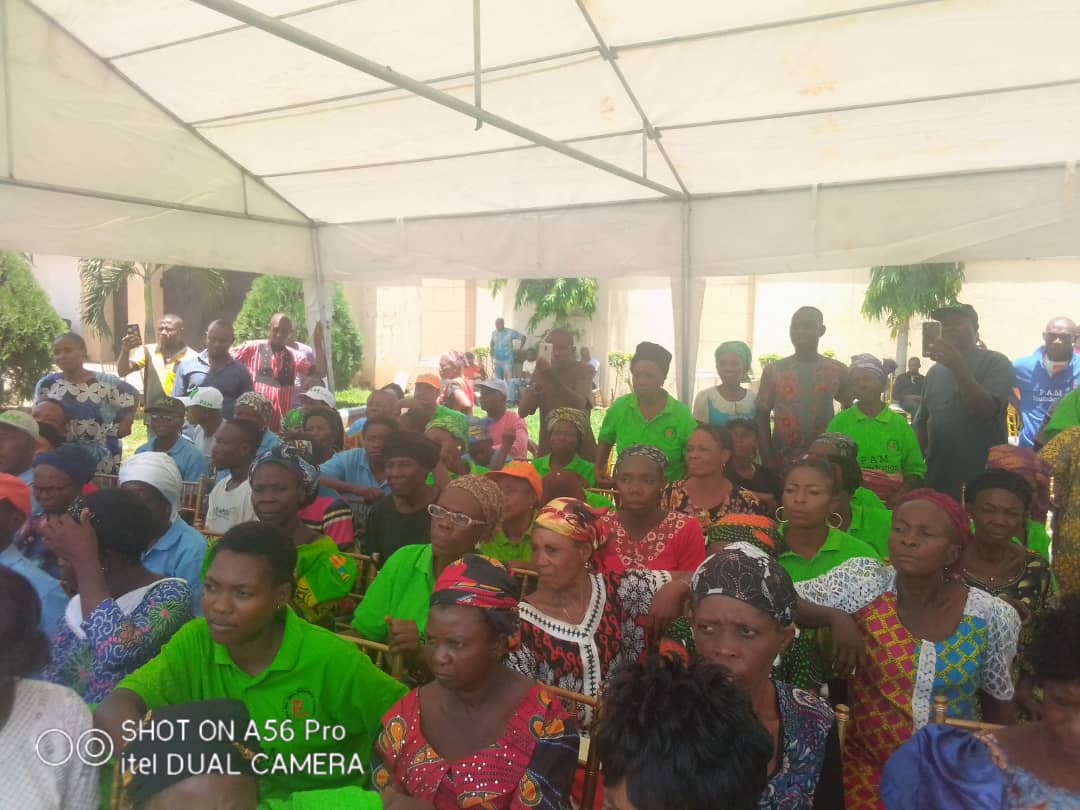 Fresh beneficiaries of Prince Alex Mbata Humanitarian Foundation, PAM, on Wednesday, gave thumbs up to Philanthropist of note, Prince Alex Mbata, for his Foundation’s empowerment programme, describing the business mogul as a rare gift to humanity.

The beneficiaries drawn from the nine local governments in Owerri zone, commended Prince Mbata for another rare show of benevolence.

The event took place at the palatial home of the business mogul in Ngwoma Obube in Owerri North Local Government Area of Imo State and was attended by over 600 beneficiaries.

Recall that PAM Foundation had embarked on an Empowerment Programme on December 16, 2021 held at Admiral Ndubuisi Kanu Square, Owerri.

Over 3,000 persons had benefited from sewing machines, hair dryers, motorcycles and N50,000 cash, doled out by the Foundation at the event.

And in continuation of the programme, a new set of beneficiaries have benefitted from the benevolence of Prince Mbata.

One of the beneficiaries, Mrs Stella Uloagwaram from Nguru Nweke In Aboh Mbaise LGA, said God will reward Prince Mbata and PAM Humanitarian Foundation, for the rare display of human kindness.

She described Mbata as a rare gift from God to humanity.

“Prince Mbata is God Sent and I must thank him for this cash gift of N50,000.

“It is very rare for poor people like us and the vulnerable to be assisted and supported.

“Life has not been easy for us but Mbata and PAM Foundation have exhibited care and love for me. May his days be long. His enemies shall not see him and God will give him his heart desires.

“God in his infinite mercy will reward him and the PAM Foundation for this kind gesture.

“I m deeply touched by this act of Philanthropy by PAM Foundation and Prince Mbata. God will certainly reward him.

Another beneficiary, 65 years old Mr. John Okehie from Owerri West LGA, said Prince Mbata has again showed what he is known for, by giving and assisting the vulnerable.

“If those we elect to serve us can emulate Prince Mbata, some of us the needy and the poor will be better off. Our society will be better.

In his speech, Prince Mbata said his Foundation’s empowerment programme is driven by his resolution to aid the needy.

He said there is no political undertone attached to the activities of the Foundation, stating that PAM Foundation had embarked on a similar programme in Lagos and Port Harcourt in the past.

“PAM Foundation has been existing long before now. I set it up in line with my conviction and vision to assist the needy, the poor and the vulnerable as prescriped by the Holy Book.

“We have built roads which is our contribution to infrastructure development of our dear State and we have assisted the vulnerable. We will not relent” he said.

innonews - January 10, 2021 0
Editors of Imo state based newspapers and online outfits, have advised Senator Ezenwa Onyewuchi, who represents Owerri zone at the senate, to...

innonews - July 23, 2019 0
The Commitee To Elect Casmir Anyanwu, has taken to the cleaners Chief Okey Ezeh for peddling falsehood over the Supreme Court judgement...

innonews - August 22, 2018 0
Former Governor of Abia State, Dr.Orji Uzor Kalu has been turbaned "Dan Taiwan Hausa" in Daura,Katsina State. He was turbaned by the Emir of Daura,...

Imo Guber 2019:What Went Wrong Between Rochas And Eze Madumere .BY...

innonews - February 27, 2018 0
The saying that there is no permanent friend in politics but permanent interest seem to have played out in Imo State with the State...

innonews - May 14, 2019 0
Barely two weeks to the handover of reins of governance of Imo State from Governor Rochas Okorocha to Governor elect, Hon...