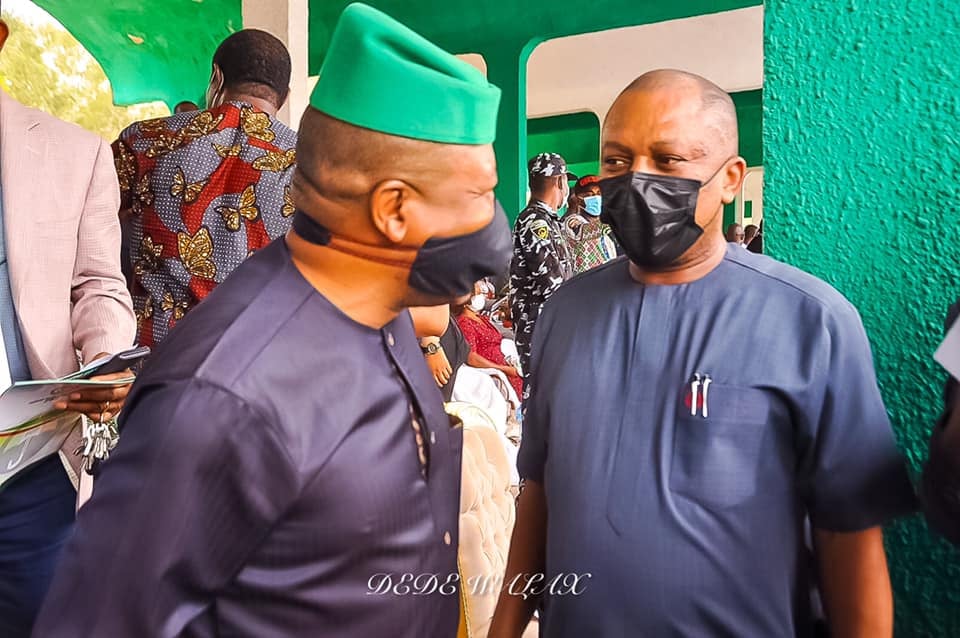 There are emerging dynamics in the Peoples Democratic Party, PDP, in Imo State.

The two political gladiators in the party, former Governor Emeka Ihedioha and National Secretary of the party, Senator Samuel Anyanwu, are engaged in deft political moves, collectively targeted at strengthening the party.

But inside sources disagree. They say such moves are driven by personal reasons of the duo for political gains in the long run.

Ihedioha and Anyanwu are said to be united on the “surface” but beyond such unity, both of them operate on different lanes in Imo PDP.

Despite reconciling their differences, after a sour political relationship which erupted during and after the PDP governorship primary in 2018, which Ihedioha won and Anyanwu challenged up to the Supreme Court, it has been a topsy-turvy between the two party men.

With the affirmation of Imo PDP congresses by the Supreme Court recently, the party structure in the State remains firmly in the grip of the former Governor. Loyalists of Ihedioha constitute ninety five percent of the party executives from the ward to the State levels. They also make up the large chunk of party delegates.

This development analysts say, places him in pole position to either sway or influence majority of candidates of the party for various positions, including influencing major party decisions, a strategy which will translate to boost his guber bid next year.

However, new entrants in the party, mainly decampees from the All Progressives Congress, APC, are streaming into the party through Senator Anyanwu. Observers say the Senator is injecting fresh blood into the party, perhaps to build a structure of new allies.

This newspaper was informed that some members of the House of Representatives of APC extraction, mainly loyalists of former Governor Rochas Okorocha, Hon Ugonna Ozuruigbo and Hon Pascal Obi, joined the PDP in the State on the strength and political persuasion of the National Secretary.

Anyanwu, after he was elected the National Party Scribe, had embarked on wooing back PDP members who left the party for the APC. One of his major catch, was a former Commissioner in Governor Hope Uzodimma’s administration, Fabian Ihekweme.

It was learnt that more decampees from the APC will come over to the PDP after the Supreme Court judgement on May 27. The apex court is expected to deliver it’s verdict on the authentic leadership of the APC in Imo State.

And despite seeming open political understanding between Ihedioha and Anyanwu to strengthen the PDP in Imo State, there are feelers that what exists between the duo, is the peace of the graveyard defined and shaped by entrenched political interests, which will certainly play out sooner or later.

Anyanwu has been fingered to be eying the governorship seat of the State in 2024, an allegation dispelled by his loyalists, who say he is at the moment, focused on his new job and committed to the task of repositioning the PDP to secure victory in 2023 at all levels.

Ihedioha undoubtedly has not hidden his desire to stage a come back as governor of the State, after his removal by the Supreme Court, which replaced him with Senator Hope Uzodimma of the APC.

These competing interests makes the PDP in the state, an interesting political laboratory as party primaries draws near.

Sources: “Ihedioha, Arrow Head Of Opposition Who Must Be Weakened Before...

RAMP Roads In Imo: What Each Zone Got

innonews - September 1, 2019 0
The Rural Access and Mobility Projects, RAMP, was flagged off in Imo State by the Governor, Hon.Emeka Ihedioha last week

innonews - March 22, 2022 0
The Archbishop Emeritus and Apostolic Administrator of Owerrri Catholic Archdiocese, Most Rev Anthony Obinna, has given details how fire rocked the Assumpta...