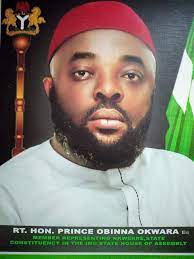 Obinna Okwara, member representing Nkwerrre State Constituency in the Imo State House of Assembly, has decamped to the Peoples Democratic Party, PDP, from the All Progressives Congress, APC.

Okwara is one of the members of the House suspended by the Speaker, Kennedy Ibe on December 23rd, 2021 for alleged “unparliamentary conduct” and insubordination to the leadership of the House.

Pictures and video of the lawmaker obtaining his PDP membership card had gone viral on the social media.

“About the rumour of my defection to PDP, yes I visited my friends in PDP and had some discussions with them. Details of what transpired may be made known later” the lawmaker told The Guardian

“I did everything within my power without fear or favour to support Uzodimma to suceed. Hence I supported all his policies and programmes

“I have intention to recontest for State of Assembly in 2023 but I am not seeing any future in APC on that so I am being left to take my faith by my hand.

He berates the Speaker, Kennedy Ibe, saying “Kennedy Ibe says one thing and does another. He has no regard for the legislative arm of the State and he is doing more harm than good to the Governor. Honestly I am surprised by his attitude and everything about him now shocking”

innonews - November 19, 2018 0
*By David Uka, Abakaliki* Students in Federal and State universities in the five States of the  South East geopolitical zone went on protest in Abakaliki,...

No Nollywood Actress Will Dangle Her Body At Me In Order...

innonews - September 23, 2018 0
The popular Nigerian Actor, Kunle Afolayan is a hard nut to crack unlike some other movie directors in Nigeria who have fallen for the...

innonews - May 23, 2018 0
The Imo State Government has denied reports in the media that the transition committee chairmen of the 27 local governments have been sacked. A statement...

innonews - October 31, 2017 0
The list of Commissioner nominees released by Governor Rochas Okorocha last week has sent clear signals that the Governor may have chosen those loyal...