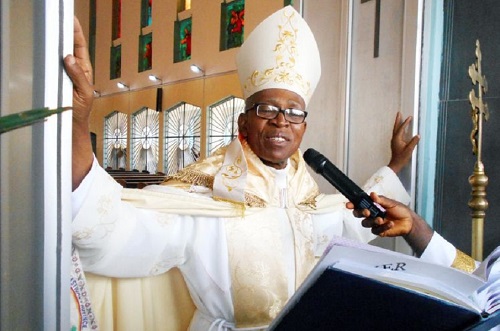 As the clamour for a Nigerian President of South East extraction gathers momentum, the Archbishop of Owerri Catholic Archdiocese, AJV Obinna, has commended leader of Pan Yoruba group, Afenifere, Chief Ayo Adebanjo, for backing calls for the next President of Nigeria to come from the South East in 2023.

“It is fairness, justice and equity. We have been doing rotation, it is only South-East that has not produced the president. How can the rest of the country be ganging up against them? We are not saying the truth. It is their right to produce the president, any other argument is selfish and such people are not serious about Nigeria” Adebanjo told Daily Sun in an interview in February.

“ The Yorubas have the key to resolving the problem of Nigeria” the Archbishop said in his homily at the wedding of the daughter of Governor Hope Uzodimma of Imo State held in Owerri at the weekend.

The Archbishop, who was quoted in statement signed by Chief Press Secretary to the Governor, Marcel Oguwuike, further appealed to the Presidency to come to the help of the Imo State Government in tackling the traffic congestion at Control Post, Owerri, which he said is occasioned by articulated vehicles from Port Harcourt and Onitsha that converge at the junction.

He also appealed to  the federal government to help open up the Avu bye-pass to help ease traffic.

innonews - March 7, 2018 0
Two Owerri based journalists, Mr. Chidiebube Okeoma and Mr. Kelechi Uzoma at the weekend escaped death by the whiskers. They were attacked by hoodlums. Mr.Okeoma...