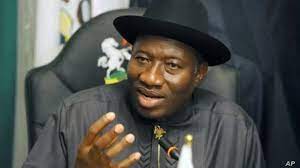 Former President Goodluck Jonathan has joined the race for the Presidency in 2023.

Members of Miyetti Allah Cattle Rearers Association secured the N100 million nomination and expression of interest forms of the All Progressives Congress, APC, for the former President.

Jonathan had told some protesting youths in Abuja few weeks ago, who urged him to run for President, that he cannot declare his intention for Presidency because “some process are still ongoing”

“You are calling me to come and declare for the next election, I cannot tell I m declaring. The Political process is ongoing, watch out” he told the youths.

With his entrance in the race, Jonathan has become the 26th presidential aspirant in the APC

innonews - October 30, 2018 0
*BY EMEKA UKAEGBU, PORTH HARCOURT* Labour have advised Nigerians to stockpile food stuffs as it insist it will not back down on its nationwide strike...

innonews - January 22, 2018 0
South East Leaders and Stakeholders of the All Progressive Congress, APC met at Imo State Government Lodge in Abuja on Sunday where they deliberated...