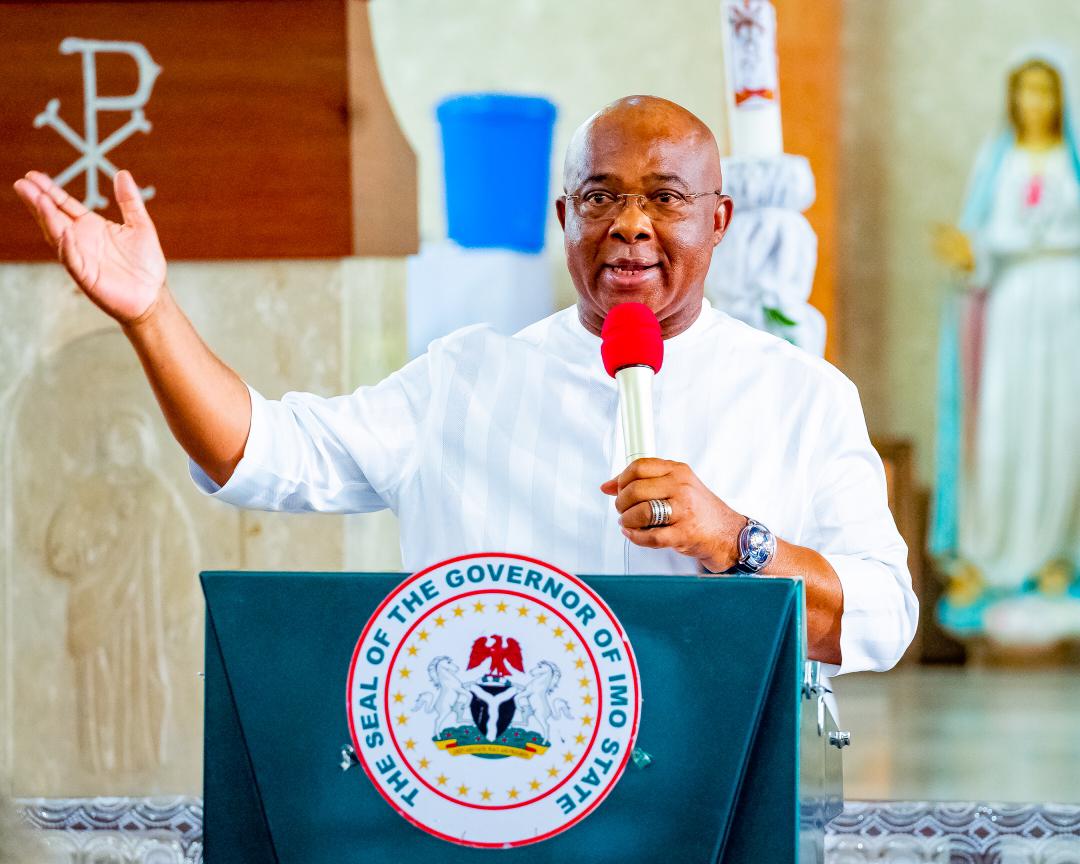 Governor Hope Uzodimma of Imo State on Saturday described Distinguished Senator Francis Arthur Nzeribe as a great man who will be missed by all.

The Governor spoke at the funeral service for late Senator Nzeribe at the Sacred Heart Catholic Church, Oguta.

Addressing the congregation at the end of the burial Mass, Governor Uzodimma, accompanied by his wife, Chioma, said everyone is in agreement that Sen Nzeribe was a great man and that his death is touchy.

The Governor said: “He came a great man, lived a great man and is going a great man. Events surrounding the late Sen. Arthur Nzeribe show that he was a great man, both in life and in death.”

He described late Nzeribe as one of Igbo’s and Nigeria’s best and brightest, and further affirmed that the late Senator was a “common denominator in the political lexicon of Nigeria.”

Governor Uzodimma assured those who came to Imo State for Sen. Nzeribe’s burial both from within and outside the State, that their security is guaranteed.

Later at the palatial home of the deceased, Governor Uzodimma and his wife signed the condolence register after which they witnessed Sen. Nzeribe’s internment.

In the condolence register Governor Uzodimma wrote: “There’s no other way of defining a great man outside what you represented here on earth before your passage. May the good Lord grant you eternal mercy and place o heaven.”

In a vote of thanks to the congregation who graced the Church Service, the former Deputy Governor of Imo State, Gerald Ironna also described late Nzeribe as “a great man even in death.”

Earlier in his homily, Rev Fr Obilor admonished the living to always ask for God’s mercy in line with bilbical injunction: “Blessed are the mercyful for they shall obtain mercy.”

He pointed out that the worst sin in the world is the denial of justice hence he urged the congragation to seek God and do good while they are still living.

Fr Obilor said late Nzeribe started on time to prepare for his eternal journey, noting that he was a practising Catholic even unto death.

Also, he said Sen. Nzeribe lived for the poor, spoke his mind as a politician and never compromised his personal relationship with his God.

Others were the Speaker of the Imo State House of Assembly, Rt. Hon. Kennedy Ibe, his deputy, Rt. Hon Amara Iwuanyanwu, Secretary to Government of Imo State, Chief Cosmas Iwu, Chief of Staff to the Governor, Barr Nnamdi Anyaehie and other top government officials.

innonews - June 8, 2021 0
BY ADA ONWUKWE The Imo State government has directed commercial bus drivers, to go to the Ministry of Transport...

innonews - July 24, 2017 0
Chelsea mercurial mid fielder, Eden Hazard has returned to training ahead of the new premier league season. This is good news for Chelsea fans worldwide. The...