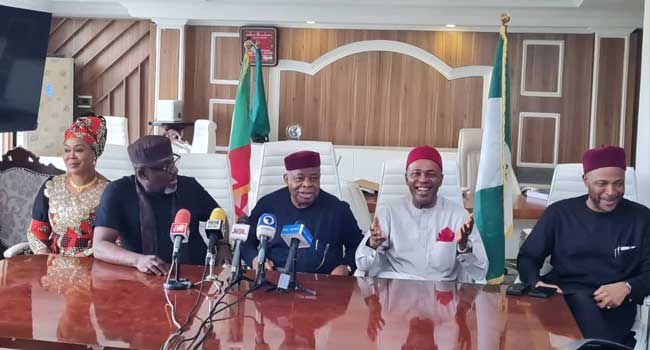 An insignificant number of delegates from five States in the South East voted for three of the six presidential aspirants from the region, who participated in the just concluded presidential convention of the All Progressives Congress, APC, INNONEWS gathered

Six presidential aspirants from the South East took part in the APC presidential primary held at the Eagle Square, Abuja.

Former Senate President, Ken Nnamani had withdrawn from the contest. Mrs Ohanenye also dropped out of the race during the primary and announced her support for Asiwaju Bola Tinubu.

The South East came to the APC Presidential convention with a total of 285 delegates. Imo State had 81 delegates,Anambra 63,  Abia 51, Enugu 51 and Ebonyi State 39 delegates.

Nwajiuba from Imo State scored one vote. Okorocha, a former Governor of the State had no vote, a clear indication that the votes of 80 delegates from Imo State went to Senate President, Ahmed Lawan, whose presidential bid was strongly backed by Governor Hope Uzodimma of Imo State.

Uzodimma and Senate Chief Whip, Orji Uzor Kalu, had drummed support for Lawan before the presidential primary of the APC.

Analysts of the APC Presidential convention contend that two of the six South East APC presidential aspirants received a total of 40 votes at the convention (Umahi 38, Onu 1, Nwajiuba 1), with the votes of 245 delegates shared by aspirants outside the South East geo political zone.

The South East Coalition for Good Governance, SECG, a socio political group had blamed the dismal outing of the South East APC Presidential aspirants on the political leadership of Igboland and the delegates.

In a statement in Enugu signed by its President, Emmanuel Okwu, the group stated that “It is evidently clear that the delegates from the South East, in the PDP and APC sold out.  Majority of them voted for Atiku Abubakar in the PDP and Ahmed Lawan in the APC during the presidential primaries of the two parties”

innonews - December 8, 2020 0
By Ikechukwu Iweajunwa Nigerian Association of Zoological Gardens and Wildlife Parks (NAZAP) has alleged that negligence of Kaduna...