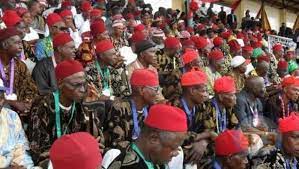 The South East Coalition For Good Governance, SECG, has said the South East is the architect of their failed presidential bids in the All Progressives Congress, APC and the Peoples Democratic Party, PDP.

The group particulary faulted the political leadership of Igboland and the delegates of the All Progressives Congress, APC and the Peoples Democratic Party, PDP, who participated in the presidential primaries of the two parties.

SECG, a socio political group, in a statement in Enugu and signed by its President, Emmanuel Okwu, said the South East went to the APC and PDP presidential primaries unprepared and divided.

“We blame the political leadership in Igboland for failing to galvanize the position of the South East. Ohaneze Ndi Igbo admittedly took a firm position, but it should have gone a step further by prevailing on the numerous presidential aspirants in the APC, to rally round one among them, when it became obvious that the region would make no headway with multitude of aspirants.

“The presidential aspirants in the APC, should have united and presented one candidate, preferably the most experienced among them- Dr. Ogbonnaya Onu, who showed guts by speaking the minds of the South East, when it was clear that the region was schemed out by the conspiracy of powerful forces in the party.

“We tend to believe that the South West wanted the Presidency more. They showed more hunger for it and this played out when presidential aspirants from the region such as Kayode Fayemi, Dimeji Bankole, Ibikunle Amosu, all stepped down for Asiwaju Bola Tinubu at the Convention ground. Other aspirants equally followed suit including one of the aspirants from the South East, Uju Ohanenye.

“It is evidently clear that the delegates from the South East, in the PDP and APC sold out.  Majority of them voted for Atiku Abubakar and Bola Tinubu during the presidential primaries of the two parties.

“Power is not given. Power is taken. Mere media hype on the marginalization of the South East is not enough to fetch us the Presidency. It is obvious we have lost out in the power game and primarily, we have ourselves to blame” part of the statement said

innonews - June 27, 2018 0
Father of Late pop star Micheal Jackson, Joe is dead. According to TMZ, the Joe passed on after the ninth anniversary of his megastar son,...

Atiku On His Way To PDP, Says Ex Lawmaker

innonews - September 24, 2017 0
Former Vice President, Atiku Abubakar is on his way to the Peoples Democratic Party, PDP. Atiku is a chieftain of the All Progressive Congress, APC. This...