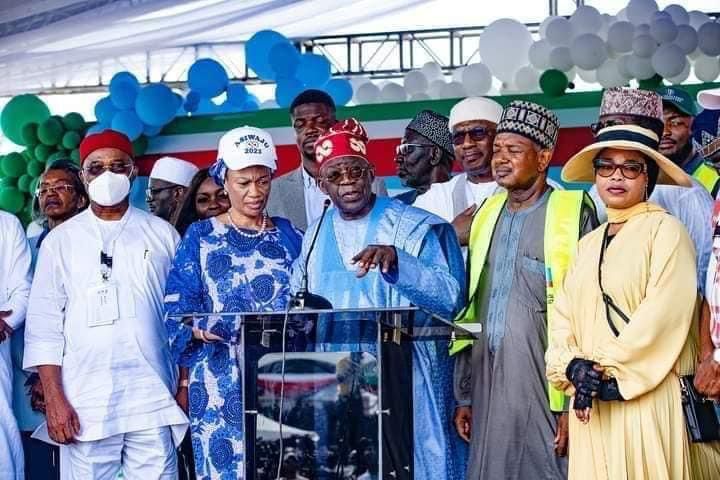 The prophets of doom had already written off the APC special convention before it started. But they didn’t contend with the adroitness of the planners. The media was awash with screaming and scary headlines of their imaginary and impending implosion of the party over a botched convention. But they didn’t reckon with the resilience of the organizers. If they knew who was behind the wheel in the just concluded national convention of the ruling ALL PROGRESSIVE CONGRESS (APC), they would not have been consumed by that negative energy. H.E Governor HOPE UZODIMMA deserves a big congrats for chairing a committee that delivered a flawless and most competitive party primary election in a Democratic nigeria. He worked with a team of committed party members including governors and ministers, Uzodimma delivered an awesome convention which will continue to resonate in the political firmament of Nigeria. If Asiwaju Bola Tinubu eventually emerges the president of Nigeria next year, nobody will forget where the foundation of the success was first laid: the memorable convention.

Indeed,it is to the credit of the Imo state governor that he proved the critics wrong by delivering a world class convention,the like never witnessed in the country. By the sheer size of the delegates,the number of aspirants and what was at stake: presidential candidate of the ruling party, Uzodinma and his team knew that only the best would be good enough for APC and the nation. He not only succeeded but exceeded the expectation of his party people and the nation at large. His patriotic zeal shone like a million stars and the work of his hand was made manifest through the grace of God. Yes , only God could have imbued Uzodinma with such organizational ingenuity and dexterity that resulted in the monumental success of the convention.

There were two expectations. One was the ambience of the venue, taking into cognizance the number of delegates. Yes , the Eagle Square was large enough. But how was it to be organized to make it conducive for the people attending the convention, including the large army of security personnel and journalists? With what happened, nobody should have entertained any fear or anxiety. The arrangements were perfect. The stands were in order. The podium well arranged. Free flow of human and vehicular traffic was taken into consideration such that there was no untoward incident throughout the duration of the convention.

The other aspect was the election proper where it was feared that owing to the fact that 23 aspirants were going into the contest that it would be unweildy for the organizers. Getting more than 2,000 delegates to vote in such an atmosphere was believed to be herculean,reason pundits were speculating that APC would settle for consensus and avoid the chaotic process of voting. But it came to pass that all the delegates cast their votes in seamless manner and the winner in the person of Tinubu emerged. All the aspirants who participated in the process expressed satisfaction with the transparent conduct of the election,hence there was no petition or dissension after the exercise.

The winner of the primaries, Tinubu has visited Vice president Yemi Osinbajo,Gov David Umahi and others who contested against him. All of them have pleged to work with him to ensure victory for APC in the 2023 general elections. They would not have made such a commitment if they were not satisfied with the outcome of the convention ably organized by Uzodinma and his colleagues. Even President Muhammadu Buhari has given a pass mark to the organizers for what he described as a very successful convention. The national Chairman of the party, Alhaji Abdullahi Adamu also added his voice in applauding the convention planning committee for a job well done. Such commendations no doubt give encouragement to the hundreds of party faithful who worked with Uzodinma to raise the flag of APC high during the last convention. By overcoming self doubt and brushing aside the criticisms of naysayers, Uzodinma has once again proved that it only takes focus, hardwork and patriotism to conquer seemingly intractable problems.

Interestingly,it appeared that many did not listen to the assurances of Uzodinma when he delivered his address at the convention. He had pledged that APC would emerge from the convention stronger irrespective of who won the primaries. He had harped on unity and cohesion as the necessary ingredients needed to actualize the much expected victory in the main election. And above all,he had demanded commitment from all APC members to make the ruling party stronger.

That strength and unity are what we have been witnessing in the post convention activities of major players in the APC. Governor after governor has pleged support to the flag bearer ,Tinubu. Irrespective of their personal preferences, they have all imbibed the spirit of the convention to put the interest of the party first. All those who participated in the convention came out with that accord of making the party stronger.

As a man who does not believe in self glorification, Uzodinma has attributed the success of the convention to the leader of APC, President Muhammadu Buhari. He described the president as the force behind the success of the party since 2015, saying that the party must leverage on the popularity of the president for the battles ahead. He also reiterated his call for all party faithful to join hands with Tinubu to ensure that the party triumphs next year. He also acknowledged Adamu for’ creating a level playing ground at the primaries and for all the support given to see that our party conducted one of the most credible, free and fair presidential primaries in the history of our party and in the country’.

To demonstrate his personal resolve to ensure that APC wins the election, Uzodinma who is the leader of the party in South East has formally written to Tinubu to congratulate him on his recent victory. In his congratulatory letter, Uzodinma described the emergence of Tinubu as a clear sign that APC will win the presidential election next year. According to Uzodimma,by Tinubu’s victory, ” the flag bearer has also reiterated and demonstrated the strength, tenacity, experience, credibility and integrity ‘ of who he is. He called on ” all our party supporters in imo state, South East and across the country to come together irrespective of differences and support His Excellency,Asiwaju Ahmed Bola Tinubu to emerge the next president of our dear country as his wealth of experience, doggedness and sincerity of purpose is needed to move our country forward at this time”

Needless to say that Uzodinma since he joined APC has really added value to the party. First,he ensured that the party retained imo state by becoming the governor after some people had squandered the goodwill of APC. Second he had attracted commendable and sizable number of bigwigs and ordinary people to the party through his superlative performance as GOVERNOR. His appeals to Igbo to embrace the party is also yielding results. The impressive turn out of notable Igbo in the recently presidential primaries of APC is a testament that Uzodinma has done well in leading Igbo to the national grid of politics which is the APC. The fact that both the presidency and the national leadership of the party always beckon on Uzodimma to execute one assignment or the other confirms that he is really important in the scheme of things. As the chairman of the APC Special Convention and Presidential Primaries 2022, Uzodinma has demonstrated that he is equal to any task that is assigned to him. The success of the Convention has proved Uzodinma as a faithful and committed party man who is prepared to go the extra mile to achieve success for APC in 2023 and beyond. Indeed it is not out of place to hail Uzodimma as the man of the moment in APC and by extension, Nigeria.

Udemba is an Abuja based political commentator

Peter Obi: The Messiah We Might Not Get. BY RICHARD ODU

Eze Madumere: The Gimmicks, Odds On The Road To 2019 Guber

innonews - July 5, 2017 0
This website has stumbled on the odds like a mount Kilimanjaro that may stall the perceived 2019 governorship ambition of Imo State Deputy Governor,...

Ohaneze Has No Electoral Value- Okorocha