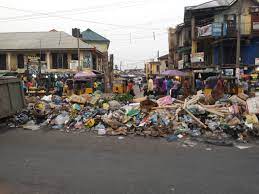 One of the most popular area in Owerri, the Imo State capital, South East  part of Nigeria, a resident of the state must be very familiar with is Douglas Road and environs.

Though, how the name Douglas, came about to earn the major road in the municipality can’t be divorced from stories warped around the trajectory of white colonialists who first arrived Owerri. One of colonialists who was in charge of administration of the old Owerri Division was named, Douglas, hence the naming of the major street after him.

Douglas road and surrounding streets remain the heartbeat of the State capital. Apart from housing the local government secretariat of the Owerri Municipal Council, it habours other major business establishments as well as the epicenter of both government and commercial activities.

In the old Owerri township,  business goes on mainly on the busy Douglas road and environs.

From the bank road end to the Whetheral Road roundabout (another name inherited from the colonial masters), all forms of commercial activities, especially trading are witnessed. Douglas road also house the  Nigeria Telecommunications (NITEL) and Nigeria Postal Agency, NIPOST offices who in their hey days made the area thick with boisterous activities, while the famous Eke Ukwu Owerre market, the traditional market of the indigenous people of Owerrre, that latter gained international status before it was demolished by the administration of Rochas Okorocha  was also domiciled on the road alongside commercial banks.

What however distinguishes Douglas road from other roads in Owerri is the presence of motor parks at all corners. Most commercial vehicles operating from the capital city to other destinations in the state and even beyond operate from the location making it impossible for a resident not to be familiar with Douglas Road.

Overtime, successive state administrations have battled the scourge of street traders taking over part of the road thereby disrupting vehicular and human traffic.

The hydra-head menace of the street traders unarguably has frustrated efforts of the previous governments at maintaining a thoroughfare movement on the road. The resultant effect has seen Douglas road turn a dungeon for criminal elements as well as location for waste disposal. The menace got to an alarming rate when gun totting hoodlums kill, maim and rape defenseless citizens at will.

First to engage in the rescue of the area was the administration of Achike Udenwa who made unsuccessful attempt to keep the traders at bay. Despite the famous Clean and Green Initiative of Ikedi Ohakim era, they stubborn business operators failed to quit the roads.  The Rochas Okorocha time couldn’t salvage the situation as his urban renewal project that included demolition of the Eke Ukwu market and subsequent expansion of the road was a wasted effort that yielded nothing.
Ihedioha during his brief stay in office as governor made efforts to restore sanity but to no avail.I was forced to visit Douglas Road yesterday for an errand before I noticed that the street traders have won the age long battle against government.

Despite efforts of the present government to give the area a facelift, the ubiquitous traders are back on the streets with temerity. I was scared of venturing into the road having noticed see of vehicles that formed a  gridlock  on the road. As one with phobia for traffic, to avoid being trapped, I dropped my  vehicle to commence a walk from the Ama JK area to Nworie lane. I battled to avoid wares of the traders which covered a reasonable part of the road.

The traders pushed and cursed whoever got close to their items on the road as I moved.
Worse still, I noticed that vehicles now permanently park on the main Douglas road near the median demarcating the dual carriage road while wares spread on each part of the road. It was disgusting to notice dirts and filth littered every corner to make a mincemeat of government  plan to keep the state capital clean.

My findings from grapevine sources within the location revealed that agents of government responsible for keeping the traders off the roads connive  with the locals to collect daily tolls thereby maintaining the illegal squatters as landlords on major roads in the state capital.

I thank God for not losing personal items because of the chaotic nature of the area while on a brief shuttle to the locality.  Except the Imo State Government has lost Douglas road and environs to the street traders, let the administration of Hope Uzodinma do the needful to rewrite the history of the area

Peter Obi: The Messiah We Might Not Get. BY RICHARD ODU

innonews - May 16, 2020 0
Of the six covid 19 patients in Imo State, which underwent treatment after testing positive at the state Isolation centre, three have...