Home Politics Uzodimma: Tinubu Has Contested Elections Before- His Certificate A Non Issue 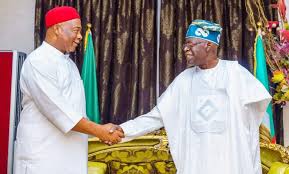 Hope Uzodimma, Imo State Governor, on Tuesday, said there should be no fuss about the credentials of Bola Tinubu, the Presidential candidate of the All Progressives Congress, APC.

Uzodimma told reporters at the Presidential Villa, Abuja after meeting with President Muhammadu Buhari, that Tinubu has run for office in the past and won.

Tinubu has been on public scrutiny after his educational qualifications were mired in controversy.

The Imo State Governor said there is no need for the former Lagos State Governor, to resubmit his credentials to the Independent National Electoral Commission, INEC because he had ran for public office in the past.

“For my presidential candidate, the issue of certificates shouldn’t even arise,” he said.

“He ran and won as a senator in the country. Where record-keeping is efficient, and the INEC server is functional, he doesn’t need to do a fresh submission.

“However, if whatever he is supposed to submit is not handy, it is not late yet. I’m sure before the time he will submit whatever is required of him.”

innonews - May 21, 2020 0
Once again, the Imo State government has placed its local government councils into the hands of unelected chairmen. It was like a...

innonews - September 28, 2021 0
Generally, ex-Senator Ifeanyi Godwin Araraume is categorized more and better as an Okigwe politician than an Imo politician by pundits. That conclusion...

innonews - December 19, 2017 0
In a bid to remain relevant in the next political dispensation, some top politicians in Imo State are  gearing up to align and re...

innonews - October 11, 2017 0
The political camp of Imo State Governor, Rochas Okorocha is sharply divided over the speculated governorship ambitions of his close allies, the Secretary to...