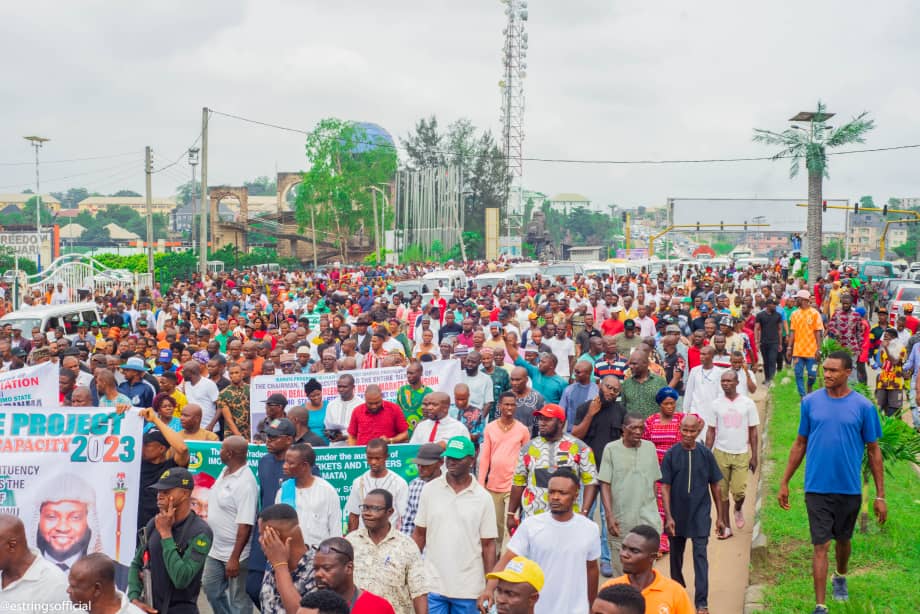 There was a huge protest in Owerri, Imo state capital, on Wednesday organized by a group, Imo Coalition For Justice, Peace and Unity.

The protesters comprising youths, men and women mainly residents in Owerri, vowed to resist attempts by some desperate politicians to fuel the insecurity in the State.

Spokesman of the Coalition,  Barr Ekeh Uzoma, said they will stand against such politicians from progressing with their evil intentions.

The group called on the Federal Government to commence investigation on the actions of former Governor of Imo State, Hon Emeka Ihedioha, former Secretary to Imo State Government, Hon Uche Onyeagocha, and former Deputy Governor, Gerald Irona over what they described as acts of sedition against the government of Governor Hope Uzodimma.

They described the recent attacks by Uche Onyeagocha against Gov. Hope Uzodimma as unwarranted, provocative and self seeking attention for his selfish interest ahead of the 2023 general Election.

“Uche Onyeagocha and his cronies has been rejected by Owerri zone and his attacks against the person of Gov. Hope Uzodimma is to pitch the people against their Governor and they will resist such desperate attempts as well as make sure he doesn’t emerge”, the group’s spokesman stated.

innonews - April 15, 2022 0
Media Relations Consultant and a ,Chief Dr Fidel Onyeneke has extolled the Imo State Government for the high quality standard of the...

innonews - September 11, 2021 0
President Muhammadu Buhari opened up on Friday, on his visit to Imo State, on Thursday, September 9. A statement...

I M Yet To Recover From Shock Of Bomb Attack- Ex...

innonews - May 6, 2018 0
Former Minister of Finance, Kalu Idika Kalu has said he is yet to recover from the shock of  a bomb explosion that rocked his...

innonews - February 16, 2020 0
By JANE UKONU Members of the Peoples Democratic Party PDP in Imo State, who have turned prayer warriors in...