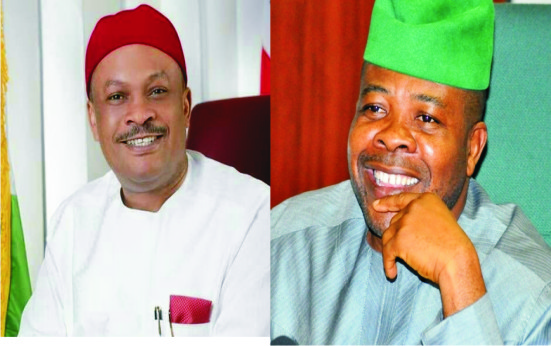 Plot on who grabs the governorship ticket of the Peoples Democratic party, PDP, in Imo State ahead of the 2023 governorship election in the state, has began in earnest.

The duo are said to be nursing governorship ambitions in 2023 and had engaged in a similar fierce battle for the party’s governorship ticket in 2019.

Though Ihedioha emerged the eventual winner of Imo PDP 2019 guber primary at that time, at the expense of Anyanwu and later became Governor of Imo State, a repeat of the epic political battle is in the offing, as the duo have rolled up their sleeves for another political clash in 2023.

Up for grabs again is Imo PDP governorship ticket, as clear indications have emerged that Ihedioha and Anyanwu will be the front runners for the contest.

The duo have engaged in a cat and mouse or political ding dong for a long time, which underscores an existing cold war, which has to an extent polarized the PDP in Imo State.

While Ihedioha can be said to be in firm grip of the party structure in the State which gives him the edge for the guber ticket in 2023, Anyanwu’s new found political weight and mileage as National Secretary of the party, also gives him the needed political stamina and firepower to challenge the former governor.

INNONEWS further gathered that despite the political tussle over party congresses held earlier this year and a seeming reconciliation that followed thereafter between the duo, many Imo PDP members agree that there is love lost between Ihedioha and Senator Anyanwu which may swell internal party feud.

Last week, Anyanwu made an audacious move to signal his governorship ambition in 2023, when he rejigged his political structure and appointed a new Director General and Secretary for his Divine Mandate Movement, DDM.

A similar move is expected from the Ihedioha camp, as sources told this newspaper that “the former governor who already has a formidable political machinery in place, has activated plans to get back his guber ambition back on track”

innonews - August 22, 2018 0
The family of Late Chief Chyna Iwuanyanwu has opened a Condolence Register at his Graceland Estate residence in Owerri and at his country home...

innonews - November 23, 2021 0
The new list of Commissioner nominees unveiled by Governor Hope Uzodimma, seems not to reflect equity, as most local governments in the...