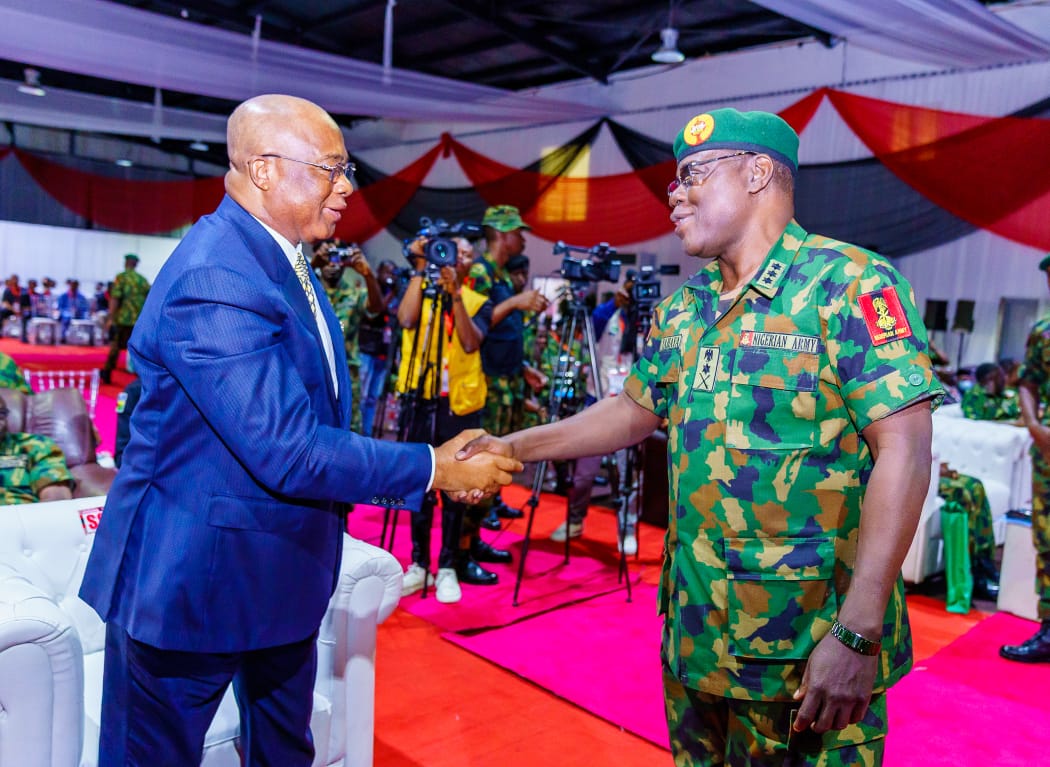 Governor Hope Uzodimma Imo State and the Military have recommitted themselves to working together to stamp out crime and criminality in the South East it in particular and Nigeria in general.

The Governor and the Military are in agreement that insecurity in the region which is fuelled by banditry, kidnapping and other forms of criminality has impacted negatively on the socio-economic lives of the people hence concerted efforts are required to change the tide.

Welcoming the GOC and his entourage on behalf of the Government and people of Imo State, the Governor thanked him  for the visit and reminded him that “the South East is under siege and attack by the activities of ESN, bandits, armed robbers and criminals.”

Governor Uzodimma said that “all efforts being made to stamp them out has been futile as they are adamant in their activities of destroying government property, killing innocent citizens, burning down police stations and generally retarding development in the zone.”

The Governor noted that insecurity has challenged government so much and that government will “continue to encourage the military and other arms of the Armed Forces to help government bring peace and ensure security to the South East.”

He then told the GOC to see him and the government of Imo State as partners.

The Governor used the opportunity to commend the Commanding Officer in charge of 34 Artillery Brigade, Obinze, Bridg. Gen. S. Sulaiman whom he said “has done a lot of job with his men in the fight against banditry and criminality, where even some of the military men paid the supreme price in the course of duty.”

Governor Uzodimma urged Maj. Gen. Musa to take the advantage of his tour of formations in the Division to “study the topography of the area, introduce new techniques and do more in the protection of the citizens of the South East, especially in this time of Christmas so that our people will enjoy the Christmas season to the fullest.”

He also encouraged the GOC and his men not to hesitate to ask for any information that will help them to  achieve their objectives of making the region safe and peaceful.

He reminded the Governor that the role of his Division is to restore peace and push bandits and criminals in the zone away  “so that the citizens will be allowed to go about their businesses without molestations and harassment.”

The GOC said so far the officers and soldiers “have tried to curtail the activities of the irredentist to ensure they are no more a threat to the law abiding citizens of the zone who are loyal to the rules, regulations and constitution of the Federal Republic of Nigeria.”

He emphasized that most of the bandits, armed robbers and kidnappers are mere criminals whose stock in trade is criminality.

He assured that it is their responsibility to ensure that the criminals are flushed out so that the citizens will go about their normal activities and enjoy their normal life.

He then promised: “I have come to serve,” noting that the troops under his watch have been counselled to remain apolitical and to conduct themselves within their professional calling.

The Chief of Staff, Barr. Nnamdi Anyaehie, the Deputy Chief of Staff (Administration),  Dr. Pat Ekeji and some members of the expanded executive council joined the Governor to receive the visitors.

The GOC was accompanied by:

innonews - September 20, 2017 0
The Anambra State chapter of the All Progressive Congress, APC  has explained why it opposed the proscription of the Indigenous People of Biafra (IPOB)...

innonews - January 23, 2020 0
The Nigeria Correctional Service, formerly Nigerian Prisons Service, has sent an Save our Soul (SOS) message to the judiciary on the...

innonews - December 29, 2017 0
In the face of non payment of December salaries to workers in the Imo State civil service, there is  also widespread complain by majority...