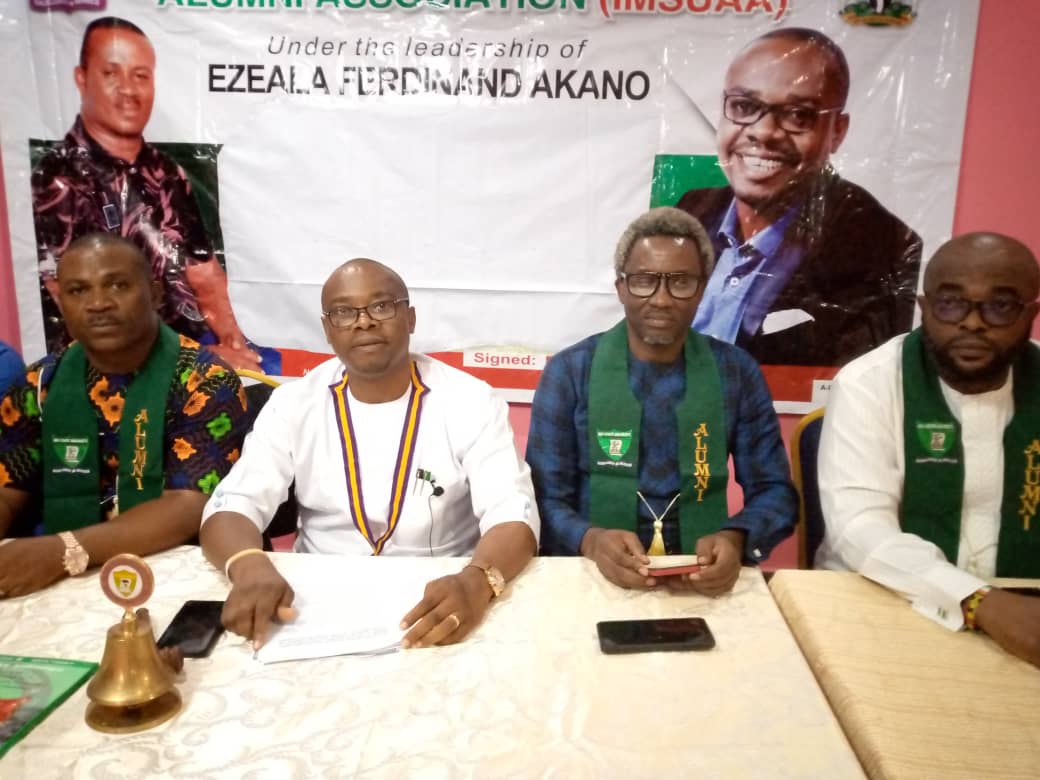 Rolls Out Achievements, As Election Holds In Nov*

The Ferdinand Akano led Imo State University Alunmni Association, aided by the Board of Trustees led by its Chairman, Ambassador Patrick Akushie, has rolled out it’s achievements in office as it’s tenure winds up, describing his tenure as successful despite distractions by detractors.

Speaking to newsmen on Sunday in Owerri, Akano said his administration performed creditably despite the fact “the Association was plunged into an avoidable crisis, as a result of the frivolous and high handed disposition of a group of people, who constituted themselves into a Board of Trustees”

Akano, who was flanked at the press briefing by executives and BOT members of the Association, said despite the distractions by the group, his leadership attracted the Light Up IMSU project, where more than 38 street lights were installed at university, and another 50 more street lights that have been pledged in monetary terms to the citadel of learning.

According to him, the Alumni also successfully inaugurated Ebonyi, Abia, Europe chapters, and attracted more than 12,000 members to it’s fold.

“We attracted a mini bus to the Alumni Association, designed the Imo State University Sports complex waiting for take off and foundation laying ceremony.

“My leadership attracted and completed the MOU for the setting up of the Alumni Digital Print and Imaging Center” Akano stated.

He further explained that his administration also successfully organized the 2019 convention, which for the first time, had in attendance a sitting Governor of Imo State

Akano further explained that his leadership also positioned the Imo State University Alumni as a key player in the Nigeria National Alumni system through strategic involvement with Association of Nigeria Universities Alumni (ANUA) and also increased media visibility for the University.

According to him, his leadership attracted “for the first time in history, a mini van from a member and leader in North America, Amb. Bishop Okereke Ekurume Foundation, who is the Vice Chairman of our North America Chapter’

Speaking on the crisis on the Alumni, he said the group led by one Chinedu Obi, without recourse to the relevant sections of the Constitution, assumed themselves into Omninpotence by claiming to have suspended an elected President on the 1st of April, 2020; elected Secretary and elected publicity Secretary. What a crass irresponsibility”

The President, who gave details of the feud with the faction, said they have been peddling unfounded allegations against his administration.

“We have been able to debunk all those allegations. Till today, none of the allegations has been proven against the persons that they claimed to have purportedly suspended.

“In order to justify that unruly behaviour, they in connivance with a few other disgruntled elements that lost the Alumni National elections in 2018, perpetrated the factionalization of the Alumni Association.

“They have resorted to writing all forms of stupid petitions to almost all the law enforcement agencies in Nigeria. They have petitioned the Department of State Services, the EFCC, the Nigeria Police Force Headquarters, both in Abuja and Lagos”

“Their insistence that they hold the certificate of incorporation and the seal of the Association has beclouded their sense of reasoning and judgement.

“Certificate of Incorporation and Seal do not translate into ownership. Members have maintained that Akano, Uhira and other elected NEC members and Chapter Exco are their leaders. They have unanimously appointed Akushie and Onwukaike and others, in an AGM in Owerri as their Board of Trustees. You cannot force Alumni of a university against their wish” he stated

He said all peace moves he initiated has been rebuffed by the group, stating that none of his Alumni members have written any single petition against them.

He urged them to take advantage of the elections in November to field candidates.

“Whoever wins will become the next leadership of the Association” he declared.

innonews - July 15, 2018 0
The much publicized election to elect fresh executives for Nigeria Union of Journalists (NUJ), Imo State chapter has been suspended. A 5 man interim committee...