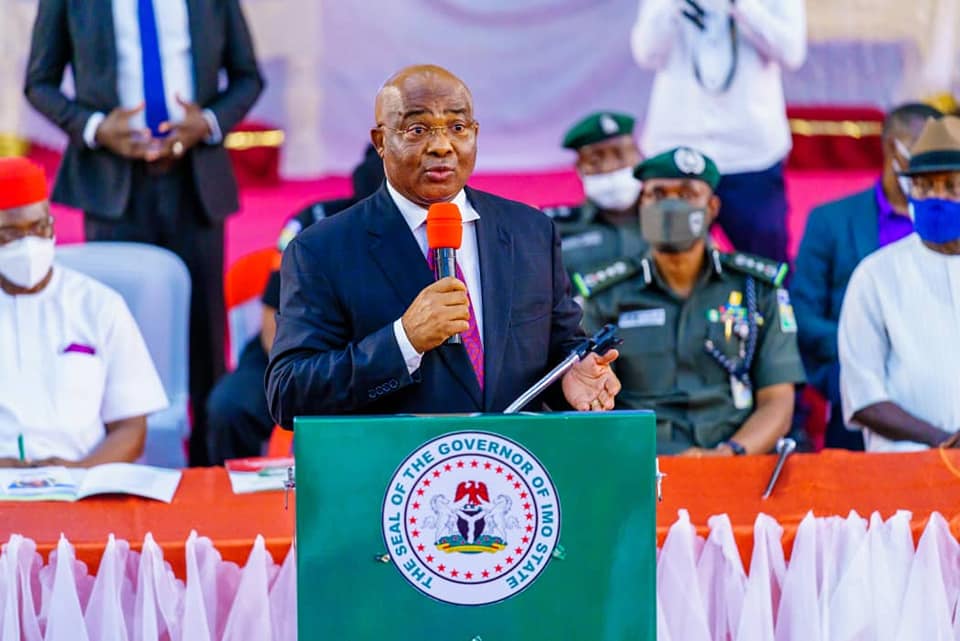 Officials of the Nigerian Navy have met with Governor Hope Uzodinma of Imo State in furtherance of discussion on approval given by President Muhammadu Buhari for the drainage of Orashi River in Oguta to link the Atlantic Ocean for the enhancement of economic activities on that corridor.

President Buhari had communicated his approval for the project through the Office of the Chief of Naval Staff, Rear Admiral Awwal Zubairu Gambo, based on Governor Uzodimma’s proposal that the Orashi River in Oguta is pregnant with lots of economic activities if drained and linked to the Atlantic Ocean.

At the meeting which held at the Government House Owerri, Rear Admiral Silyranda Lassa represented the Chief of Naval Staff.

Addressing the media on the essence of his meeting with the Navy, Governor Uzodimma said it was in furtherance of  the discussions and proposals by the Imo State Government to the Federal Government to pursue her Gas Industrialization Policy on the Oguta Lake and Orashi River axis.

He said that the leadership of Nigerian Navy were in the State to “visit the site to assess the main obstacles hindering the programme as proposed by the State Government.”

Governor Uzodimma said that the Government of Imo State had “considered it expedient to propose to Nigerian Navy for a partnership to open the access of Oguta Lake and Orashi River up to the Sea in River State to enable bigger vessels come into Imo State.”

The Governor said: “When realised the project will help manage the security situation in the area, eliminate cases of crude oil stealing, pipeline vandalism and enhance security.”

Additionally, he said the realisation of the project will “stimulate economic activities, create more jobs for our people and then boost the economy of the State.”

Governor Uzodimma said the Naval Officers who are in the State will visit the site tomorrow, Saturday,  September 24, 2022, and thereafter “Government will sign a Memorandum of Understanding (MOU) leading to the project implementation proper.”

He described the project as work in progress, assuring that “when the MOU is signed and the other processes concluded the authorities will come up with the work programme highlights which will be made available to the public.”

Speaking on the reason for their meeting/visit, Rear Admiral Silyranda Lassa who represented  Rear Admiral  Gambo said recently they “established a Naval Base at Oguta which has helped in addressing certain security challenges in the area.”

“Beyond that, it has made social and economic activities to strive, especially with giant strides in the security areas made the State Government.”

Furthermore,  Lassa said as a Maritime Security Agency the corridor will provide them with the opportunity “to also assist the State in any way they can and in some certain aspects, the State’s desire to at least alleviate what they are seeing as the de-generalization activities within the State.”

The Naval Chief also informed that they were in Imo “at the instant of the Chief of Naval Staff to look at where we will partner with the State Government to assist in some of these areas and help the State benefit from her enormous resources.”

He acknowledged that a lot of natural resources abound in the area and that when they are opened up “Imo State will be one of the leading States in the Gas industrialization activities in Nigeria.”

Lassa added that in the course of their visit, the Hydrographer of Nigerian Navy will look at the area under examination and carry out the survey. “They will be able to chart appropriate areas they think that will be in cheapest possible manner they can achieve the mandate to the State,” he said.

He acknowledged that the Geographic Department of the Nigerian Navy has already started the dredging/expansion and survey of the River Niger which started from Lokoja, noting that work has progressed up to Burutu.

“Once this is completed the entire aspect of the survey is done. It will be left for the Federal Government to do the needful and the expansion of that axis. So when the corridor is expanded it will open up the area to the benefit of Imo State and Country in general.”

We Are Not Talking Of A Seaport But Access To The Sea, Says Imo Government

innonews - October 16, 2017 0
Super Eagles of Nigeria made some marginal movement in the latest FIFA rankings on Monday. They Eagles climbed from the 44th position in the world...

innonews - February 8, 2020 0
BY: EVEREST EZIHE The appearance of Surveyor C.A.P Anele, the Imo State Surveyor General at the Ministry of Lands,...