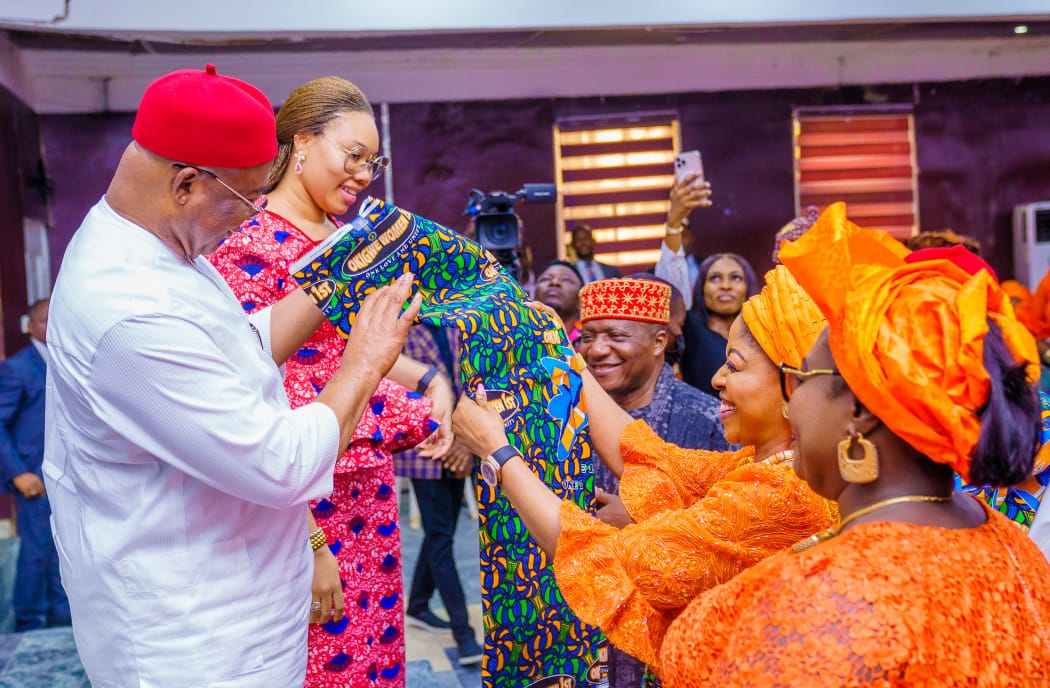 Governor Hope Uzodimma of Imo State on Thursday received in audience the women from Okigwe who came specifically to thank him and his wife,  Barr. Chioma Uzodimma, for their support to the zone.

The women operating under the umbrella of “Okigwe Women First Alliance’’ were led by the National Coordinator of NEPAD, Princess Gloria Akobundu.

Receiving the visitors at the Sam Mbakwe Expanded Exco Chambers,  Government House Owerri, the Governor thanked them for the visit and commended them for recognizing his efforts and commitment to the development of Imo State.

The Governor promised that before the end of 2022, the Owerri/Okigwe road which first phase was commissioned by  President Muhammadu Buhari recently will be completed.

Governor  Uzodimma reminded the women and Okigwe leaders who accompanied them that he came with the zeal to bequeath the best legacies of good governance to Imo people, but regretted that along the line there were temptations.

Notwithstanding the temptations  he said his government has continued to do the good things for which he will be remembered like the first Governor of old Imo State, late Samuel Onunaka Mbakwe.

He said the disturbances, infractions, armed robbery, kidnapping, and other insurrections in Okigwe zone were not caused by the good people of Okigwe, rather by those who escaped during the jail breaks at the Correctional Centre in Owerri.

He said he will not as  Governor of Imo State watch Imo people live in fear, noting that the State is poised to do her best to assure the people of adequate security and peaceful coexistence.

The Governor said that Okigwe zone has highly civilized and educated men and women who ought to know the political situation of Nigeria and hence, cannot afford to play opposition politics that does not bring development.

He noted that the achievements so far recorded by his administration are solely because of his relationship with  President Buhari and not necessarily the result of the budget or Internally Generated Revenue.

He therefore enjoined Okigwe people and by extension, all citizens of Imo State, to endeavour to hook unto National Political Grid by voting for all APC candidates in the forthcoming elections.

The First Lady, Barr. (Mrs.) Chioma Uzodimma who accompanied the Governor to receive the Okigwe women and the leaders described the visit as reassuring of the people’s support to the Government of Uzodimma.

She commended the leader of the Group, Princess Akobundu for mobilizing the women for the visit and said with their coming she is sure they will take the government and the administration to the Promised Land.

Addressing the Governor earlier,  Princess Akobundu said the visit was precisely to thank the Governor and the First Lady for their show of magnanimity to Okigwe people and Okigwe women in particular.

She commended the vision and  infrastructural revolution in the State by the Governor for which Okigwe zone has benefited immensely with the construction and commissioning of the phase 1 of  Owerri/Okigwe road.

She said that infrastructure is the bedrock of development and expressed the gratitude of Okigwe women and Okigwe leaders to the Governor for also making Imo State secure and peaceful.

She pleaded with the Governor to re-engage the leadership of Okigwe zone on the need to eschew bitterness and rancour and come together for the overall development of the zone.

Princess Akobundu reiterated that the women of Okigwe zone are solidly behind the Governor, and that they will continue to support him until he succeeds in his second tenure as Governor of Imo State.

In their goodwill messages, an elder statesman and Philanthropist of Okigwe zone, Chief John Enyogasi (Ok 2,000), the zonal Chairman of Okigwe Council of Traditional Rulers, His Royal Highness, Eze Goddy Okeke and a women Leader, Lady Jacinta Ukoha, all professed their unflinching support to the Government of Governor Uzodimma and promised to ensure that he is returned for second tenure.

Present at the visit were the Speaker Imo State House of Assembly, Barr. Emeka Nduka, the Secretary to the State Government, Chief Cosmas Iwu, members of the Imo State Executive Council of Okigwe Extraction, the APC Senatorial candidate for Okigwe zone, Hon. Patrick Ndubueze and that of Orlu Zone, Senator Osita Izunaso, leaders of Okigwe zone and other Traditional Rulers.

Police Kick Against Destruction Of BillBoards, Campaign Posters In Imo

innonews - January 11, 2019 0
The Imo State Police Command has frowned at the unlawful superimposing, destruction and removal of billboards, campaign posters and banners by...

“God Has Revealed Cure For Coronavirus To Me” Prophetess Florence

Why Izunaso’s Petition Against Ibediro Will Not Stand- Imo Information...

innonews - July 2, 2018 0
Imo State Information Commissioner, Prof Nnamdi Obaireri at the weekend took to the social media to explain why Senator Osita Izunaso’s appeal against the...