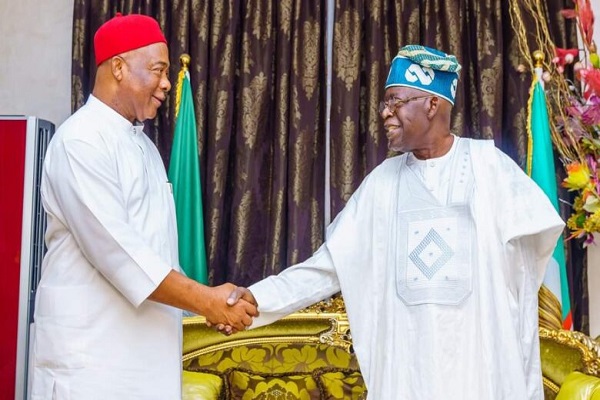 Bola Tinubu, Presidential candidate of the All Progressives Congress, APC, will speak to stakeholders in the private sector made up of investors, manufacturers, traders, ahead of his main campaign in Imo state.

This was disclosed by Governor Hope Uzodimma, who spoke to newsmen at the Sam Mbakwe International Cargo Airport, Owerri, on arrival from the APC Presidential flag- off in Jos, Plateau State.

Uzodimma reiterated his call on Igbo to align with the government at the centre, by keying into the agenda of the APC, which he described as a success story in Imo State.

“And you don’t change the winning team as APC is wining in Imo State and other States of the Federation so it should continue,” he insists.

He stated that he has not seen any calculation in the population of over 200 million people in Nigeria that will “whisk-off APC,” noting that “in Imo State there are things to show why all and sundry should encourage APC.”

He described the APC presidential flag off in Jos, Plateau State, as a symbolic event, which will encourage other states to replicate.

The Governor stated the APC would flag off its campaign in the State on Monday,November 21, 2022, an event Asiwaju Tinubu, would also be in attendance.

innonews - November 25, 2017 0
Cash squeeze has hit the Peoples Democratic Party,PDP in Imo State as the era of money flow seems to be over. It was learnt most...

innonews - May 7, 2018 0
The Chinese model of leadership has been advocated for electing leaders in Nigeria based on their past performances at lower levels of government Former Anambra...