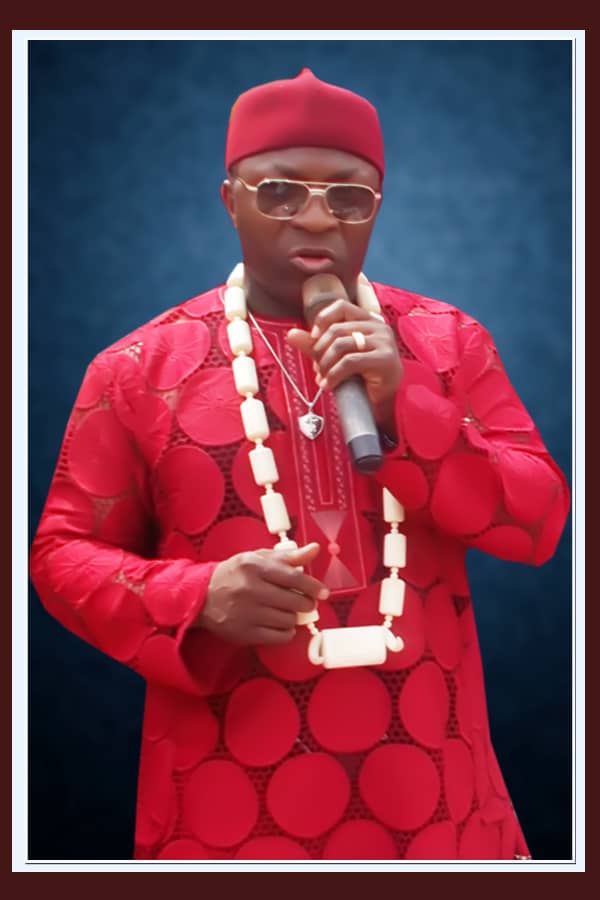 The event described as the mother of all distribution of food items and empowerment took place at Palace of Late Eze Benigrus Duru, which also doubles as the residence of the Onochiri Obi of Umulewe Autonomous Community.

The atmosphere was filled with happiness as the Onochiri Obi of Umulewe who is also the first son of Late Eze Benigrus Duru, celebrated 2022 Christmas for his people with sumptuous meal and empowerment materials.

Speaking during the program; the Youth Leader of Umulewe Autonomous Community, Comrade Ugochukwu Emelu, described Mr Okwudili Duru as a divine gift to the Community.

His words; today we are gathered at Obi Ukwu Umulewe, the Palace of Late Eze Benigrus Duru where his son Benigrus Junior and the real hair apparent to the Kingship Throne of Umulewe celebrated Christmas for his people, he is philanthropy personified”

We are happy that he called us to celebrate Christmas for us, it is in his behavioral mannerism to celebrate yulitide with his people, puting smiles on the faces of his people has been his lifestyle.

We appreciate his empowerment programs for the youths, women and elderly ones, which he does every year to help ameliorate challenges many poor people are facing in the community,

His words; “recently he carried life touching empowerment program for  over 30 elderly people, women and youths were also empowered. He is a leader with human heart always touched by the plights of his people. He  has been consistent in empowering  his people,we pray God to reward him abundantly”

Filled with joy that Onochiri Obi, Okwudili Duru,  gave the youths a cow for Christmas  celebration, the youth leader Comrade Emelu, said “we accepted the cow he gave us to celebrate christmas with gladness of heart.

Comrade Emelu who noted that no youth from Umulewe has been identified with any crime committed in Ideato Nation also urged them to maintain their decent and honest lifestyle.

Speaking further he cautioned the youths to always stand for the truth and promote peace unity, justice and fairness no matted whose ox is gored.

He condemned intimidation of the poor by the rich and strong, stating that it is wrong to take what belongs to another man because you are stronger than him.

Adding his voice; Hon. Ajogu,  Magnus, Gburugburu of Umulewe from Odoekiti Umudiefi, said; “We are at the palace of Onlchiri Obi Benigrus Okwudili Duru, the first son of late Eze Benigrus Duru,  to witness the killing of the cow he  gave the youths for Christmas celebration and other empowerment items he carried out for the betterment of his people

Hon. Ajogu, said’ “Onochiri Obi Okwudili Duru is a man with a good heart, posterity will not forget his good works in a hurry”

The mother of Onochiri Obi, Ugoeze Clementina Duru has this to say; “my prayer is that God will bless my son abundantly for his milk of human kindness, eyes of evil  people will not see him, I pray that God will raise more philanthropists like him so that there will be more good hands to impact in the lives of our people.

Younger brother of Onochiri Obi, Prince Chimezie Duru said God will surely reward him for his good works, saying; “there is reward for every work be it good or evil,my prayer is that God will reward and protect Onochiri Obi.

He admonished the youths to respect their fathers, stating that fatherhood position represents a lot in a family.

In the views of Mr Alphonsus Echefu, Onochiri Obi is a leader who loves his people, God is pleased with what he does by helping the poor, our prayer for him is long life, divine protection and God’s abundant blessings.

Observers and admirers present during the event described him as the only Onochiri Obi who empowers women, youths and elders  in his palace at the righ time.

High points of the event was; mouth watering refreshment and cash donations to the women wing, youth wing and men wing of the community, after they were entertained with a sumptuous meal. There was also cultural dance to entertain the people.

Onochiri Obi of Umulewe Autonomous Community who resides outside the shores of Nigeria was ably represented at the program by his younger brother, Prince Chibueze Duru and his sister Princess Felicity Duru.

innonews - January 5, 2018 0
BY DAN OPARA# The entire people of Obodoukwu Ancient Kingdom in Ideato North LGA of Imo State on Thursday Jan.4th 2018 witnessed the presence of...

innonews - September 21, 2019 0
The Imo State Governorship Election Petition Tribunal, sitting in Abuja has dismissed the petition put up by the Governorship candidate of the...

innonews - September 17, 2018 0
*BY  CHIDI OKERE* Senator Ifeanyi Araraume blew hot today when he vowed that he will join forces to unseat the present government in the 2019...