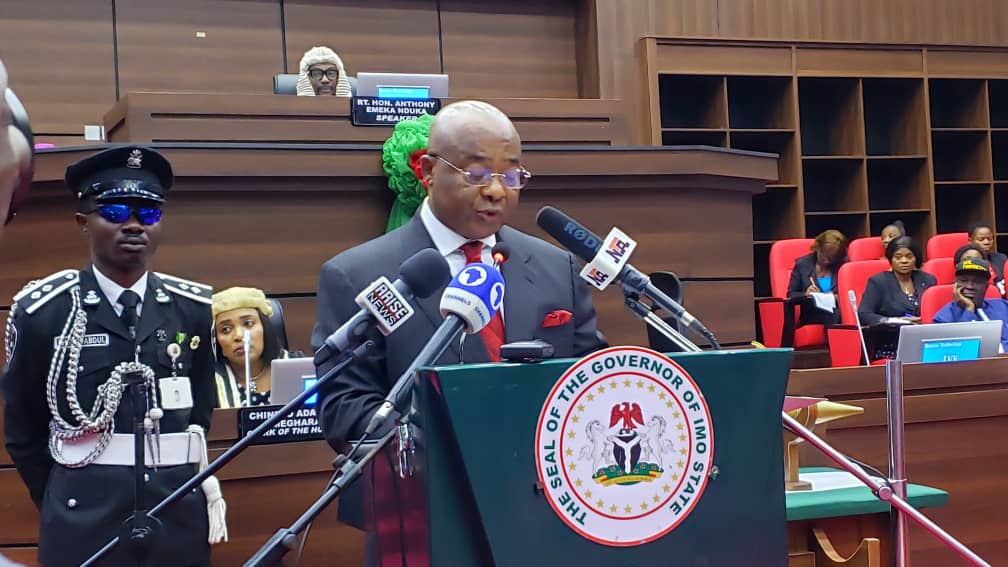 Governor Hope Uzodimma on Tuesday presented a 2023 budget of approximately N475 billion to the Imo State House of Assembly where he reiterated that his administration will continue to vigorously pursue policies and projects that will create wealth for the ordinary people.

After the presentation, members of the House of Assembly unanimously applauded the governor for laying foundations of economic growth that will outlive his administration.

He said the 2023 budget is aligned with the 3R’s (Reconstruction, Rehabilitation and Recovery) Policy, which is to promote shared prosperity in Imo State.

“Government will therefore continue to put the well being of the citizenry at the centre of governance through the ongoing reconstruction of our dilapidated infrastructure both in the urban and rural areas as well as the provision of adequate security to protect the lives and property of our people.”

The beauty of the 2023 appropriation is that the Capital Expenditure also increased substantially from what it was in the 2022 budget.

Governor Uzodimma reminded the lawmakers of the need to get the lighting at the Sam Mbakwe International Cargo Airport to function as well as the dredging of the Oguta Lake to Urashi river, all of which are capital intensive, but have the capacity to change the economic fortune of the State when they are completed like the road signature projects (Owerri-Orlu and phase I of Owerri-Okigwe roads) and the ongoing ones (Owerri-Mbaise-Umuahia and Orlu-Akokwa-Mgbee-Uga roads) across the state.

The governor who gave a synopsis of the Sector’s performances of the 2022 budget in the face of challenging times reminded the lawmakers that efforts would be intensified to generate enough resources through fiscal discipline and accountability that have become the hallmark of his administration.

He recalled that the gains recorded in the implementation of the budget of the fading year are already obvious in the new edifice that is today the Imo State Assembly Complex, the completed signature road projects and the ongoing ones, the investment in youth empowerment, among numerous other people-oriented programmes associated with the Shared Prosperity Government.

Governor UIzodimma said: “The Hallowed Chambers in which we are all comfortably seated today is not only befitting for this Honourable house but indeed any legislative house anywhere in the world. Not only is it modern and beautiful, it also provides an expansive luscious ambiance that enhances legislative capacity. And this is one of the proud products of our shared prosperity administration in less than three years. This is something previous administrations could not do for nearly 10 years.”

“Never again will you make laws for Imo people in excruciating discomfort. Welcome to the shared prosperity world where the dignity of the three arms of government; The Executive, The Legislature and The Judiciary, will never be compromised.

“So, Mr. Speaker, Honourable members, permit me to use this wonderful edifice, delivered by our 3R government, which you are part of, as the point of contact of our achievements in the fiscal year 2022, to declare that we have done exceptionally well indeed. I shall return to this subject shortly.

“As you will recall, on each occasion that I have presented budget estimates to Honourable members, I had always emphasized that the new Imo State of our vision is anchored on freedom, security, and shared prosperity manifested in practical good governance that all can see. On each, occasion I have also assured you that despite the huge infrastructure deficit we inherited, coupled with the paucity of funds and the sorry state of the socio-economic facilities we met on assumption of office, we will not be daunted from making spirited efforts to turn things around for the better. You will agree with me that we have walked that talk and we have kept faith with the good people of Imo State.

“Almost three years down the line, even the most chronic cynics or critics will agree that Imo State has witnessed a breathtaking transformation that has permanently changed both her landscape and fortunes for good. There is no doubt that as I have repeatedly promised, good governance, shared prosperity, equity, justice and the rule of law have been the defining hallmarks of this administration.

“Even in the face of daunting challenges, including the unrelenting onslaught of contrived banditry from those who have vowed to make the state ungovernable for me, we have remained tenaciously focused on the goal of delivering the dividend of democracy to our people. From the world – class dualized highways of Owerri – Orlu, Owerri – Okigwe and ongoing Owerri – Umuahia and Orlu – Mgbee – Uga roads, it is clear that we are determined to open up the infrastructure space for an unprecedented economic boom in trade, commerce and tourism for our people.

“Distinguished Honourable members, it is against this background of sustained prosperity driven policies for our people, which has also seen us make audacious inroads into Industrial policy formulation, digital economy and e – government, and massive wealth creation, through unprecedented youth empowerment programmes and Skill up Imo digital agenda, that I present the 2023 budget estimates which I have rightly christened Budget of Wealth Expansion. This is a step further than the 2022 budget rightly christened Budget of Wealth Consolidation and Recovery.

“While in the outgoing 2022 fiscal year, we concentrated on wealth consolidation part of which saw to the recovery of the looted patrimony of Imo people, our fiscal focus next year is to expand the wealth created and touch the lives of every Imo household.

“I believe that 2023 is the year we should expand our wealth creation drive to reach all the nook and crannies of the 27 Local Government Areas in Imo State. This is what defines the 2023 budget estimates. At this juncture, let me now take you through the major achievements we recorded in this year which gives an insight into the performance of the 2022 budget.”

Governor Uzodimma recalled that one solid legacy his administration has brought into governance is inclusiveness and accountability.

His words: “I say so because never in the history of Imo State has any administration gone all out, as we have done, to ensure that the people are part and parcel of the government.

“I also inaugurated an Elders Council which is a standing consultative committee that interfaces regularly with government. The Council is made up of Elder Statesmen, Religious leaders, Business icons and bureaucrats. They meet regularly to appraise government activities and to offer needful advice.

“It is also on record that we introduced the peoples budget regime, wherein through organized interactions with stakeholders at the grassroots, the people are allowed to make inputs into the budget. This way, the budget we come up with each fiscal year is naturally people – driven.

“In addition, we usually go the extra mile to make the content of the budget and its implementation public, by publishing them on the government website, both in English and Igbo. This ensures that we are not only accountable to the people but transparent as well. Little wonder we have won many cash – backed awards from the World Bank sponsored States Fiscal Transparency Accountability System (SFTAS), for consistency in accountable and transparent management of our budgetary protocol.

“Worthy of mention also is the fact that we initiated a platform through which every Imo person can interact directly with the Governor through a live phone – in radio programme that involves all the private radio stations in Imo State. During the programme, all the radio stations are connected on line and Imo people anywhere in the world can phone – in to ask the Governor any question – uncensored.

“With all these people – driven policies and programmes, you will agree with me that we mean what we say and say what we mean when we say that we have come to serve Imo people in utmost honesty and with the fear of God.

“Mr. Speaker, Honourable Members, there can be no better opportunity to extend my appreciation to all of you for your undying support and commitment to the ideals of my shared prosperity administration. You have always been there to offer legislative co-operation when ever needed. Without a doubt, you have been worthy partners in the faithful implementation of our vision of a prosperous and peaceful Imo State. I thank you all immensely, and I remain proud of you all.

“As you can deduce from the budget estimates which I am laying before you today, my administration is ever committed to the wellbeing of every Imo person; Child, Boy, Girl, Man and Woman, including the aged and the disabled. We will continue to vigorously pursue those policies and projects that will create wealth for the ordinary Imo people, provide enabling environment for investors and ensure the security of the lives and property of Imo indigenes and residents. This is the social contract which I entered into with the good people of Imo State, and by the grace of God, I shall keep it with every energy at my behest.

“It is also in the spirit of this social contract that I am glad to inform my esteemed Imo people that my administration has taken necessary legislative measures to ensure that henceforth, those who loot, or looted, the common wealth of Imo people are promptly brought to book. Last May, I signed into law, a bill by this August Assembly known as IMO STATE PUBLIC COMPLAINTS, FINANCIAL CRIMES AND ANTI CORRUPTION COMMISSION, otherwise, known as law No 2 of 2022.

“By the provisions of this law, those who defrauded or defraud Imo people, either by embezzling public funds or looting public treasury or siphoning money for contacts not done or and all sundry corrupt practices, will now have to face the full wrath of the law. So let all and sundry take notice therefore that the days of business as usual are legally over.”

Earlier during a Special Plenary for the Budget presentation, the Speaker, Emeka Nduka welcomed the governor and his entourage and reeled out the numerous people-oriented programmes of the Uzodimma administration with the submission that Imo State is getting better under his regime.

He commended the governor for his achievements in the State, particularly his life changing projects and promised that the legislature will continue to partner the executive to serve the people well through oversight functions.

They commended the governor for giving capital expenditure another lion share in the 2023 budget, saying it shows he has come to work for the people.

The lawmakers unanimously promised to give the budget accelerated attention to ensure it is passed on time so that the governor can start implementation immediately in the interest of the people of Imo State.

2023: Princess Gloria Akobundu And Burden Of Leadership In Okigwe Zone....

innonews - February 24, 2022 0
By: Kelechi Uzomah 08064075316 Hon. Princess Gloria Akobundu is the national coordinator/Chief Executive officer of the New Partnership for...

innonews - January 19, 2020 0
Spiritual Director, Adoration Ground, Enugu State, Rev. Fr. Ejike Mbaka, is not done yet on Imo State after he had prophesied...