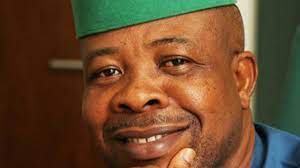 Emeka Ihedioha, former governor of Imo State, has lost a top aide, who also doubles as spokesperson of his campaign team- The Rebuild Imo Organization.

Meekam Mgbemelu, a one time Commissioner in Ihedioha’s shortlived government, had on Tuesday, tendered a letter of resignation as spokesperson of Ihedioha’s campaign team.

In the letter dated January 17th, 2023, Mgbemelu cited, among other things,
“the internecine conflicts within Imo State Peoples Democratic Party (PDP)”, as basis for his resignation, which he noted “has significantly impeded my ability to communicate effectively to the various stakeholders that constitute the broader collective”

“Only recently, a PDP Senatorial candidate of our great party was unfairly denied the opportunity to offer his services of his constituents in Orlu zone where I also hail from. Ironically, the sad turn events was precipitated by a fellow party member”part of his resignation letter stated.

Onyeriri was sacked as senatorial candidate of the PDP in Orlu zone by the Supreme Court last Friday.

innonews - May 4, 2022 0
The Okigwe zone Youth Mandate met at Umuelemai, Isiala Mbano Headquarters on 3rd May, 2022, where they passionately appeal to the Governor...