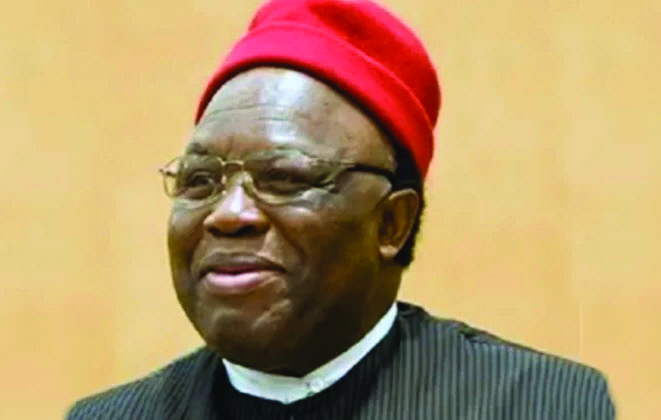 “George Obiozor, contrary to speculations in some quarters never hid his support for a Nigerian President of Igbo extraction. In words and deeds, he knocked down all apparent tackles against the realization of this great Igbo project” part of the statement stated

He also said the Late Ohanaeze Ndi Igbo leader served Nigeria with all his might.

“George served Nigeria with all his might. He gave the best of his brain and brawl for the good of his nation. Both as a young scholar in Lagos, a  Federal establishment officer, an officer on the side of Biafra, a lecturer, diplomat, administrator, community leader and elder statesman, his achievements stood out .

“With his death, at a ripe but active age of 82, Nigeria  lost a conscience! Africa’s intellectual content is depleted by ounces. Humanity is at pains with his exit. His home state , Imo , is hugely bereaved.

“We mourn with a Nation in a possible transition from consumptive to productive experience. We mourn with a national  leadership that is at the verge of change. We identify with the immediate family of the bereaved and  with the state of Imo.

“The sad departure of Prof Obiozor is a personal lost. I have lost a confidant, a motivator, leader, mentor and political adviser. He, until his death, has been as supportive as ever, resilient and committee to my quest to become the next governor of Imo State.

“I am glad we had robust exchanges and  my deep- seated  experience in him , made me a more prepared aspirant for governorship position. I pray that the owner of the universe grant him a perfect repose in his kingdom. We expect the present generation of leadership to continue in the lines of our departed leader” the statement concluded.

innonews - May 22, 2021 0
President Muhammadu Buhari has expressed sadness over the air crash that claimed the Chief of Army Staff, Lt. Gen. Ibrahim Attahiru, and...

innonews - September 17, 2018 0
Liverpool striker, Mohammed Salah has said there is no truth in rumours that his team mate, Sadio Mane is selfish. He said rather there is...

innonews - July 25, 2017 0
Former Aviation Minister, Femi Fani Kayode is not done yet in his verbal assault on the Imo State Governor, Rochas Okorocha. The Imo Governor had...