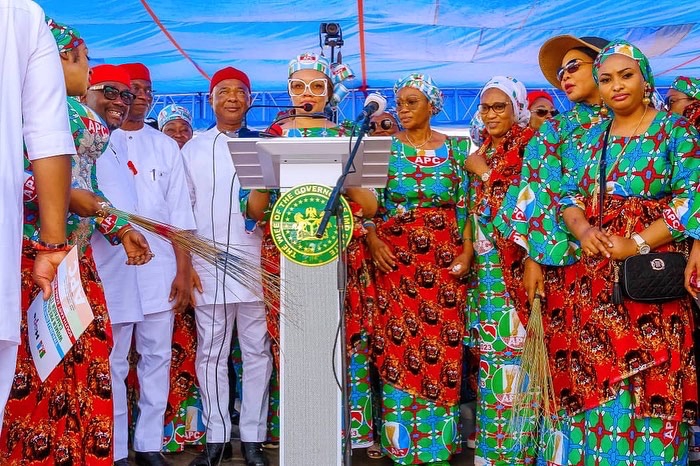 In what can be described as the mother of all rallies pulled by the APC women in the Southeast is the APC South East women Presidential rally for the party’s Presidential candidate, Asiwaju Bola Ahmed Tinubu and his running mate, Sen. Kashim Shettima which was held in Owerri, the Imo State capital today which had in attendance the First Lady of Imo State and Coordinator, Southeast Tinubu/Shettima women campaign team, Barr. Mrs. Chioma Uzodimma, Sen. Mrs. Oluremi Tinubu, Hajia Nana Shettima, APC women leader, Mrs. Betty Edu and the host of other personalities across the zone and Nigeria.

Addressing the mammoth crowd of women, Barr. Mrs. Chioma Uzodimma recounted that the Southeast women had gathered in their numbers in October last year when they held a One Million rally for Tinubu/Shettima and today’s presidential rally expresses the desires of Southeast women that in APC and her presidential candidate, Southeast will be carried along in governance at the centre.

She reinstated that the APC Presidential candidate will be very accommodating towards women and a Tinubu Presidency promises social inclusion and political empowerment of women by promoting legislation that sees to female employment in all Government offices, Ministries, and Agencies. The goal is to increase women’s participation in Government to at least 35 percent of all governmental positions. Such legislation shall also mandate the federal executive (particularly the Cabinet and core Senior Advisers) to reserve a minimum number of senior positions for women and private institutions shall be strongly encouraged to do likewise.

Barr. Mrs.Uzodimma reassured the APC presidential candidate that the entire Southeast women will come out en masse on Saturday 25th of February, 2023 to vote massively for APC as Tinubu’s presidency will renew the hope of Nigerians for more development and encouraged the women to ensure they collect their PVCs so as to actualize the project of Tinubu’s Presidency.

Sen. Oluremi Tinubu, wife of the APC Presidential candidate who was delighted at the turnout of Southeast women applauded the giant strides of Gov. Hope Uzodimma in infrastructural developments and assured the women that the APC and the administration of Asiwaju Bola Ahmed Tinubu if voted for will carry Nigerian women along in his appointments and other social programs as well as address peculiar issues of the Southeast.

Gov. Hope Uzodimma of Imo State while addressing the Southeast women reiterated the need for women as nation builders to participate actively in politics and the crowd of women here shows that APC and Bola Ahmed Tinubu is loved and will be voted for by the people of Southeast.

Gov. Uzodimma appealed to the women to take the message of Renewed Hope back to their respective states and localities and urged them to remain resolute and committed towards ensuring the victory of the party in all the elective positions in the country.

The Presidential rally which was held at the Real Admiral Ndubuisi Kanu Square(RANKS) witnessed thousands of women across the zone in their beautifully adorned wrappers, marching and demonstrating with joy their satisfaction with the Tinubu/Shettima ticket of the APC and display of support ahead of the Presidential election later in the month of February.

innonews - November 10, 2021 0
A chieftain of the All Progressive Congress, APC in Imo State, Hon Obed Anyadike, has advised chieftains of the party to learn...