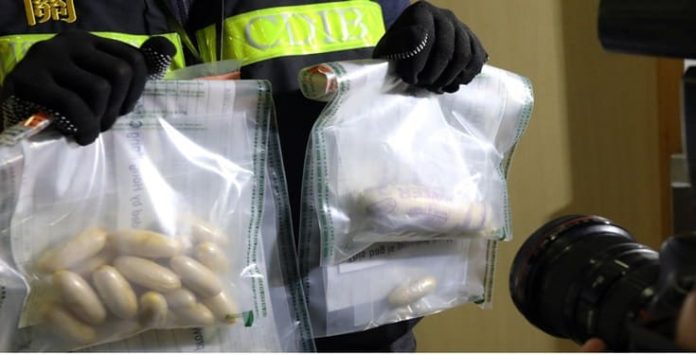 Customs officers at Hong Kong International Airport recovered more than half of a kilogramme of cocaine from a Nigerian woman who allegedly hid the drug in her body, South China Morningreports.

The 37-year-old arrived in the city on a flight from Lagos via Addis Ababa, Ethiopia.

Customs officers intercepted the suspect, who claimed to be a businesswoman and was said to be acting suspiciously, shortly after her arrival on Thursday.

She was taken to Queen Elizabeth Hospital in Yau Ma Tei for a check-up and confirmed to have foreign objects in her body.

Officers first recovered 215 grams of cocaine contained in condoms and plastic bags found in her vagina.

She later discharged 24 capsules of cocaine, each weighing 14 grams, from her body.

The authorities said the woman, who was detained for inquiries, may discharge more drugs.

Under the Dangerous Drugs Ordinance, the maximum penalty for drug trafficking in Hong Kong is life imprisonment and a HK$5 million fine.

EFCC To Begin Manhunt Of “Yahoo Boys” Indicted By FBI

innonews - August 24, 2019 0
The Economic and Financial Crimes Commission (EFCC) has said it will begin immediate manhunt for the home-based Nigerians indicted by the United...

innonews - November 9, 2017 0
Liberian President, Ellen Johnson Sirleaf who arrived Owerri, Imo State for a two day working visit has been conferred a chieftaincy title. It would be...