Home LEAD STORIES Ahead Of May 29: Transition Technical Commitee Hand Over Report To Ihedioha 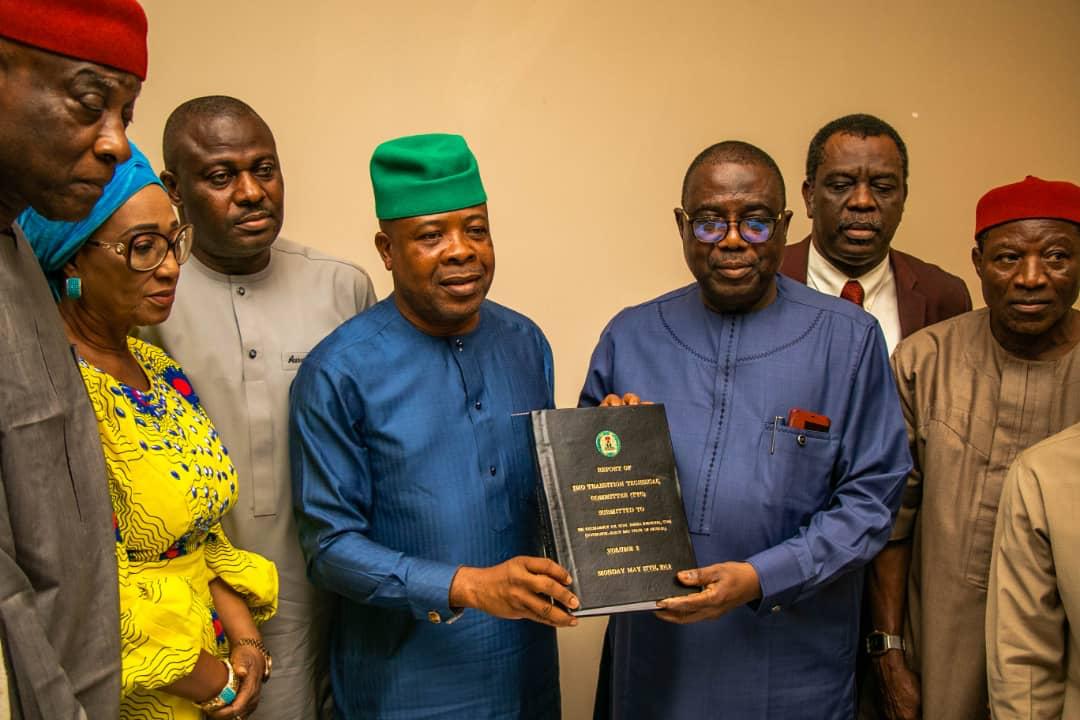 The Imo State Transition Technical Committee, has formally presented it’s report to the Governor–elect, Emeka Ihedioha and his Deputy, Hon Jerald Ironna.
The committee presented the report before the incoming government led by the PDP on Monday, 27 May, 2019 at the Protea Hotel, Owerri.
The report was finely articulated and documented on a thickly covered giant book and was duplicated into four parts.
Speaking to journalists shortly after the presentation of the report to the incoming government, Chairman of the Transition Technical Committee, Mr Ernest Ebi, said the report was a template which will guide the new Imo State Government to properly set the agenda for good governance in order to restore the lost glory and pride of Imo while affecting lives meaningfully.
Ebi added that the report was timely presented as it reflected transformation of the state in terms of infrastructure and rehabilitation of abandoned projects, saying privatization was also considered, a sure positive step to economic viability and social development in a manner that will not hurt the people, but bring prosperity to them.
According to the Transition Technical Committee, “the report was realistic. Such will help the new government to positively hit the ground, at least for 100 days in office. There are a lot of damage the incoming government is going to inherit, but will solve them all. The report is transformational– a paradigm shift and governance is not going to be business as usual. We saw paucity of funds from the out- going administration championed by Governor Rochas Okorocha, but pushed on till we got it rightly”.
The committee was happy for the opportunity given to them by the Governor- elect and his Deputy to work out a blueprint to rebuild the State.
The governor-elect, Emeka Ihedioha, however, appreciated the committee for work weldon and vowed to look inwards while implementig the report.

innonews - September 20, 2017 0
Ace entertainer, Charly Boy Oputa has written to President Muhammadu Buhari where he expressed his views on a wide range of issues, including the...

innonews - May 13, 2018 0
With the torching of the State Secretariat of the All Progressive Congress, APC in Imo State on Friday, it has been more drama among...

innonews - April 22, 2020 0
The Federal government has disclosed that researchers in the country’s universities are working on vaccine and cure for COVID-19.

innonews - November 25, 2018 0
Chelsea manager, Maurizio Sarri, has lashed out at his players following their 3-1 defeat to Tottenham Hotspur on Saturday. Dele Alli, Harry Kane and Heung-Min...