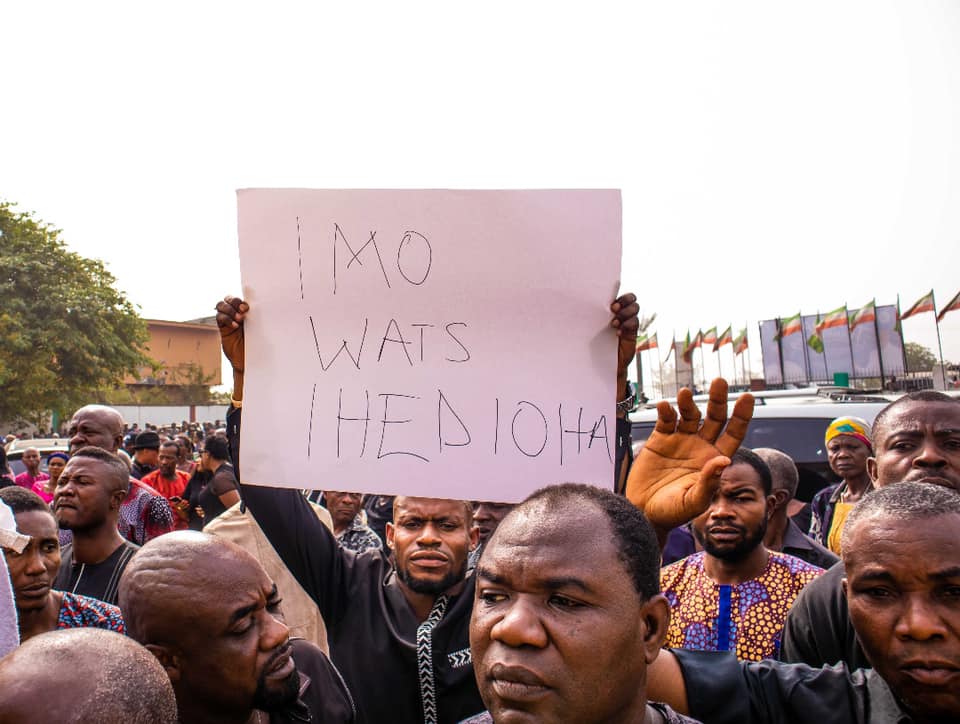 Thousands of protesters all clad in black attire took over major streets and roads in Owerri, Imo State capital, to protest the removal from office as Governor, Hon. Emeka Ihedioha.

The Supreme had last week sacked Ihedioha as Imo State Governor and declared Senator Hope Uzodinma of the All Progressive Congress, APC as duly elected Governor of the State.

He said “I do not agree with the judgement of the Supreme Court. I think it is unfair, unjust and does not reflect the voting that took place during the elections. It also didn’t take care of the sensibilities of the people of Imo State.

The protest largely peaceful, were made up of men, women and youth, who carried various placards some with the inscription “ Imolites want Ihedioha, “ Reverse The Injustice Now” “Emeka Ihedioha is Our mandate, Imo voted for you” “The temple of justice has been defiled”

They also called on the international community to save Nigeria’s democracy and vowed that the injustice meted to Ihedioha would not stand.

innonews - January 19, 2018 0
A chieftain of the Peoples Democratic Party from Imo State, Dr.Chuks Ajaelu was among a high powered delegation of National PDP professionals and Business...

innonews - February 16, 2018 0
A former Commissioner of Education in Imo State, Dr(Mrs) Gloria Chukwukere is dead. The top politician and chieftain of the Peoples Democratic Party, PDP was...

innonews - September 24, 2020 0
Opuruozor, a media expert says APGA is the most peaceful political party in Nigeria By Emma Emenike